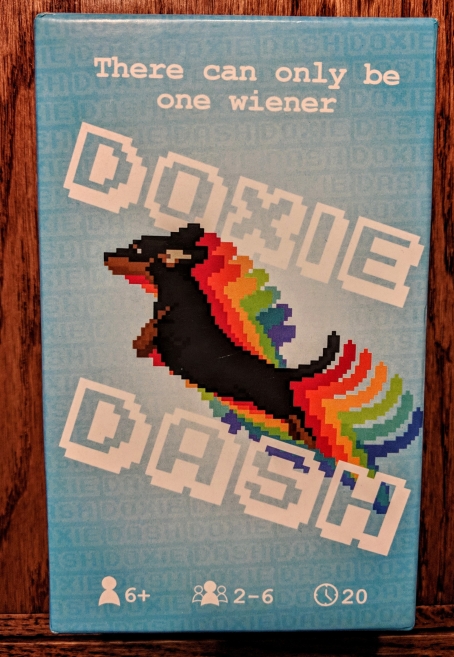 A day in the life of a doxie. You will need to come out on top of the pack by being the best dachshund you can be. How will you get there? That is up to you, whether you choose to steal skivvies, defecate on fine oriental rugs, or even defeat the vacuum cleaner and save the meeps. All is fair in the day of a hero, but remember there can only be one weiner.

Doxie Dash is a card drafting game, in which each player has their own unique hero that gives them two seperate special abilities. One of these abilities is a bonus additional “card”, used to help make sets for scoring. The other ability helps players during the end of round scoring phase. 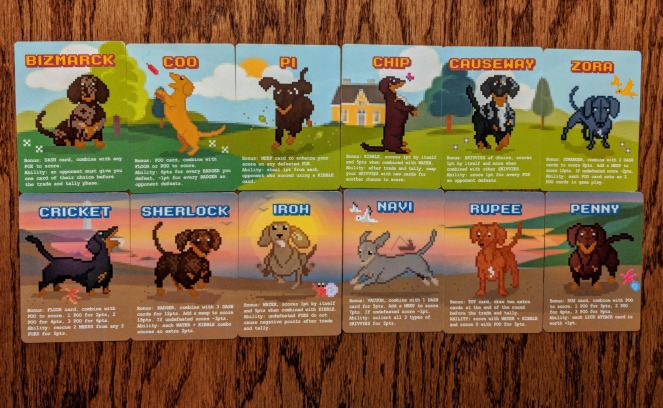 Set up is a breeze. First each player will select their hero (an adorable dachshund) that they will play for the entire game. Then each player is dealt a starting hand of 11 cards. From these cards, the player will pick one to place facedown on the table. Once all players have decided, the cards are revealed. Then the remaining cardhand is passed to the player on their left. Play continues in this way until all cards are played on the table.
Next players will go into the trade and talley phases. First, players have the option to discard any cards they feel are not helping them reach their goal. They then draw from the top of the deck back up to 11 cards in front of them. Once all players have completed the trading phase, players then begin to tally their points. There are a variety of cards in doxie dash, and most of them are focused on creating sets. Let’s take a closer look at those card sets:

Once players have created their sets and tallied their points, the next round begins. Players are dealt 11 cards and continue in the same fashion as the last round. The game ends once the first player has reached 100 points. First person to reach 100 points is the weiner.

I received a prototype copy of Doxie Dash for playtest and review, so components are subject to change. The one thing I can say though it that the art is fun and vibrant. The pixelated art really fits the theme of this game. It almost makes me feel like I am young again with my tamagotchi pet, and trying to keep it out of trouble. Plus, the art is all based off the dogs at Long Long Ranch, so it is really interesting to see how they were implemented into this game. 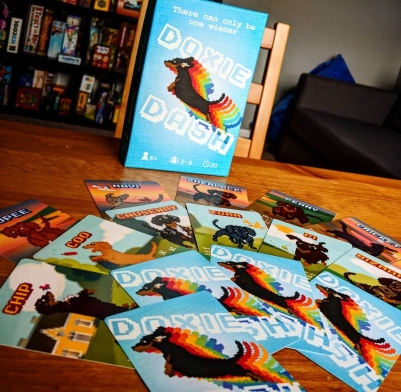 Since getting the prototype of Doxie Dash, I have played it at least twenty times. It is so easy to take out and play, because it has a short play time, and set-up takes under a minute. Beyond the ease of playing, Doxie Dash has some great strengths that keep me coming back to it, even after I have submitted my playtest review. It is a game that is family friendly, and could be played with a young child, but still has enough strategy to engage adults.

While it is similar to other drafting games on the market, like Sushi Go, it has two mechanics that really take it to the next level. The first is the addition of the hero cards. Hero cards add an aspect of asymmetrical gameplay that players have to keep in mind. The second mechanic that helps Doxie Dash stand out, is the trading mechanic. This introduces a “push your luck” mechanic to the game that I have no seen with other drafting games. Players are able to try and score higher points by trading cards in, but they may also draw cards such as undefeated enemies which will cause them to lose points rather than gain points.

One thing I will say is that Doxie Dash plays significantly better at higher player counts. While it is completely functional as a two player game, it really shines at 4-6. This is because there is more variety in the card draft when there are more cards in play. Players are then able to have more variety in their sets and their scoring. I still enjoy the game at 2 players, but I love the game at 5.
I highly suggest this one if you are in the market for a new filler game. It is small enough that it could be taken to a restaurant or other venue to play, and simple enough to explain that anyone could play it and enjoy it. If you want to pick up a copy, head over to their Kickstarter. You can also follow their journey on Instagram…best part about that, is there are board games AND cute dogs!