***While it is a difficult task to review a legacy game without spoilers, I will try to do this as little as possible. I will not spoil any story elements.***

The Forever King is looking to colonize into the vast unknowns. He has hired six builders to expand the Kingdom of Greengully, each one seeking to be the most glorious charter. Builders will work hard to unlock crates and develop the strongest lead for their individual charter.

Charterstone is a legacy style game, meaning that throughout a campaign of game players make permanent changes to the board and gameplay. Specifically Charterstone is played over a series of 12 campaigns, with story aspects and rules being unlocked through player actions, and organically as the campaign progresses through game after game.

Charterstone is a worker placement game. Players really only have two options in a game for their turn. Play a meeple or pick a meeple up. Now where you place your meeple and other decisions will be more complicated as the story progresses, but that is the basic mechanic.

During the beginning of the game the players will have only a few spots to place their meeples. They will have the individual resources of each charter, and the five spaces in the commons. The commons spaces will allow you to do a variety of things like open crates, build buildings, gain reputation or victory points and score objectives. In your first few games, you will likely be spending a lot of time in the commons trying to get crates and build buildings.

Each turn a person will place their miniatures or pick up any number of them. Each color charter comes with colored meeples which can be placed in any charter. If a player places a meeple on a space that another meeple is already occupying, the meeple that originally occupied the space gets returned to their owner.

There is a time tracker that is moved up by certain actions, like scoring an objective, opening crates or building buildings. This track with be set a different place depending on how many players there are. Once the track is depleted the game is over.

Players will then see how many victory points they have from actions taken in the game and how reputable they are. They will then permanently mark their score based on glory on their box, and the victor will color in a trophey.

Many of the components in Charterstone are secrets to be revealed throughout the game. 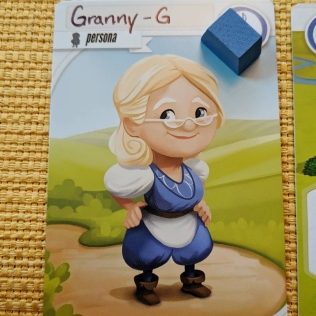 I can’t even reveal my favorite component without giving a spoiler. However I will say that the components are high quality. The meeples and wooden parts are sturdy and visually pleasing. They could have opted to go with cardboard punch out, but the wooden resources gives the game a nice aesthetic. In addition to wooden resources and meeples the game includes on custom wooden die. The game also includes metal coins, which I absolutely love. The stickers surprised me, as they come off the card fairly easily and I have yet to rip one in two campaigns. Additionally, the board is double sided. This allows players to pick up a recharge pack and play a second campaign.

The only thing I would have liked to see would be dividers in the index. The index is where you will be getting all reference cards, building cards, story cards, ect. You will spend a lot of time searching for numbers that aren’t exactly 1-350. I wish that there were dividers that gave a range of numbers so I would know what section to look for when searching for a card.

First I want to touch on the story aspects of the game. I will not tell you very much about the story because I think that it is one of the best parts of the game, and I want you to experience it without any spoilers or background knowledge outside of the synposies. What I will say is that if you are an avid reader, you will enjoy that the story unravels very much like a novel. There will be conflict throughout, and it will build a clearer picture of the world you are interacting with. That being said, the story is not too complex. If you wait weeks between games it should still be easy to remember where you left off. There, that’s all I will say on the matter.

Charterstone provides something mechanically unique, that will hopefully begin to shift how legacy games are made and designed. It provides a legacy experience with the possibility of limitless play. As a consumer, I feel better that I am not purchasing a game that can only be played twelve times. Instead, I can continue to explore my little colony of Charterstone over and over again. It is also exciting to see other people’s boardgames. Each game ends up being a unique game with unique engines and possibilities at the end. I’ve played in two different campaigns and the boards are vastly different.

In my two different campaigns we have played at different player counts. I have found that playing at two player is just as fun as playing at higher player counts. I really like that there does not have to be an autonoma at low player counts because the game has rules to adjust for charters to fill in without autonoma playing. However, if players are looking to speed up that process they can make use of the autonoma rules included.

The beginning games of a Charterstone campaign are slow by design. There is a strong sense of excitement and discovery to unlock crates and build buildings but those are really the only things players have to focus on. There are extremely limited choices meaning that the first games can be relatively repatitive. By game four our games had expanded enough to offer more strategic decisions and created a focus on engine building. Despite the slow build, there are a lot of rules introduced in the first couple games. It is important to read those rules carefully and out loud I find. Due to all the rules being introduced one after another, it is easy to miss something if rules aren’t read with care.

As with many other worker placement or euro games, there is limited player interaction. The vast majority of player interaction that will take place is one player bumping another player. This has some effect on gameplay, as players are able to get a meeple back without an action and that impact can grow through out the game in a variety of ways. However, that is the main player interaction.

All in all, I would suggest Charterstone to those who enjoy worker placement games. It is mechanically innovative, providing a worker placement experience that is both engaging and at points strategically challenging. The joy of building a charter and watching the board fill up is a unique experience, and ending with a personalized game makes it all the more worthwhile. Charterstone is a solid midweight worker placement. If you enjoy games like Lord’s of Waterdeep, Keyflower or Viticulture, I would suggest taking a closer look at Charterstone as the mechanics will feel familiar, but the game will expand past those games throughout the campaign. While Charterstone is not my favorite Stonemaier game, I have enjoyed it enough to purchase multiple copies and introduce it to multiple people.