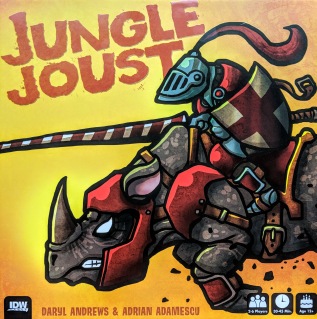 You have arrived in the capital of the kingdom for the spectacle of the year. Strong warriors riding rhinos are ready to compete in the jousting tournament. Only the quick and mighty will prevail, and it is your chance to make it big. Place your bets correctly, and gain riches. Bet carelessly, and fall into a life of debt. Make sure to use your favors carefully and select the right knight to cheer on.

Jungle Joust is a betting game in which players will compete against one another to ensure that their rhino is victorious in the joust.  Players will set up with board in the middle of the table, with the fence in the middle and jousters on either side. Then create stock piles of all money, debt and favor tokens. Additionally players will take the betting chits and place them in ten piles with corresponding colors and symbols with the three chit stacked on top of the two. Finally, players will shuffle the joust deck, giving each player two cards and setting two additional cards face up to form the tableau. During the beginning of the game, players will be assigned either a red allegiance or black allegiance. This corresponds to the knight they will be rooting for. 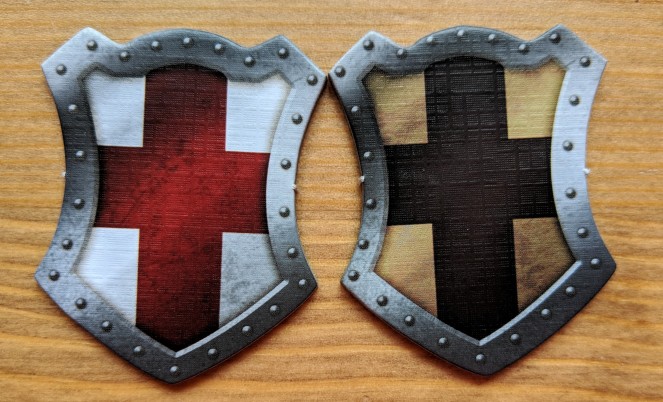 During a player’s turn they will take up to three actions in the following order: play to a tilt, take other actions, draw one or two cards.

Players continue taking these actions until the two clash symbols on the jousters meet. This will trigger a round of scoring. There will be three rounds of scoring, and the person with the most money at the end of those rounds will be victorious. Let’s take a closer look at how players score points:

Players will do three rounds, scoring after each clash. The player with the most coins after the third clash wins the game.

Due to the 3-D nature of the jousting field, the game has a visually interesting table presence. The 3-D components are sturdy, and go together easily, taking only a minute or two to put together. The cardboard makers are made of thick, sturdy cardboard that punches out easily with no rips or tears. The artwork is vibrant, and eye catching with easily distinguishable symbols.

One thing players should be aware of is carefully placing cards on the tilt. If cards get shuffled by movement, it can be difficult to determine which box the rider should be in. The more cards placed, the more difficult this can be to determine. With this exception, the game is easy to set up, and has good components that should hold up against wear and tear.

The first thing that stands out to me about Jungle Joust is it’s theme. There is no doubt in my mind that you will not find another game with a rhino jousting theme on the market. The game components add clearly to the theme. Anybody walking by the table will know that you are playing a game about jousting. The unique pieces will also draw curiosity of other players because of its strong table presence.

In addition to the theme, Jungle Joust does provide an interesting take on the betting or waging mechanics by allowing players to easily manipulate either side of the joust. Players can choose to help or hinder either side of the joust, and sometimes will even be forced to assist the other tilt because of the cards they are dealt. It keeps the game play fresh, as players will have to adjust their turns accordingly to what the other players did. However, much of the game does come down to the randomness of card draws because of that. Players spend a lot of the game hoping that whatever is in their hand will still be useful by the time their turn comes back around again. This is especially true in higher player count games where players may get only a few turns each round. It gives the game an air of randomness that many strategic players may find off putting.

The way the rule book is laid out is difficult to follow, and makes learning the rules difficult. For instance, players may be seeking to find out what the favor tokens printed on the board mean, and would expect to find that information under either favors or maybe under the play to a tilt section, but it is instead listed after the clash section (which leads into scoring). Flipping through the rule book took significantly longer than it should have for a relatively simple game.

However, my main concern is with the scoring of the game. It is very fiddly, and with the poor lay out of the rule book, can be extremely difficult to learn and teach to other players. Players must know when to look at just one tilt, when to look at both tilts, when to only consider the victor and when they need to consider the victor, symbols and tilts. If the scoring was simplified, it could have taken this game from a meh game to strong option for a simple betting/wagering game.

As it stands, Jungle Joust is an okay game, with a interesting theme, strong table presence and a interesting take on the betting mechanic. After a few rounds, players are able to figure out the scoring and the game moves more quickly. Players who enjoying wagering games with some luck and some strategy will likely enjoy Jungle Joust. I would suggest trying it if you enjoy Camel Up but are looking for something slightly more complex, or something that you can more easily manipulate.