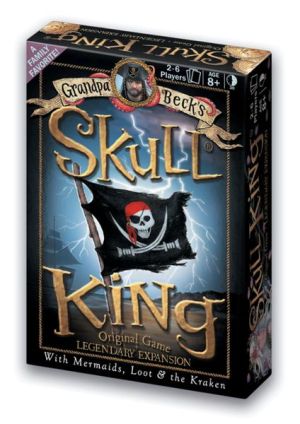 Pirates are sailing the Seven Seas in search of treasure. Lead your ship to success and become the richest pirate on the sea, or sink into debt as you make poor choices. The strategies you decide upon will lead you to great success or your demise. 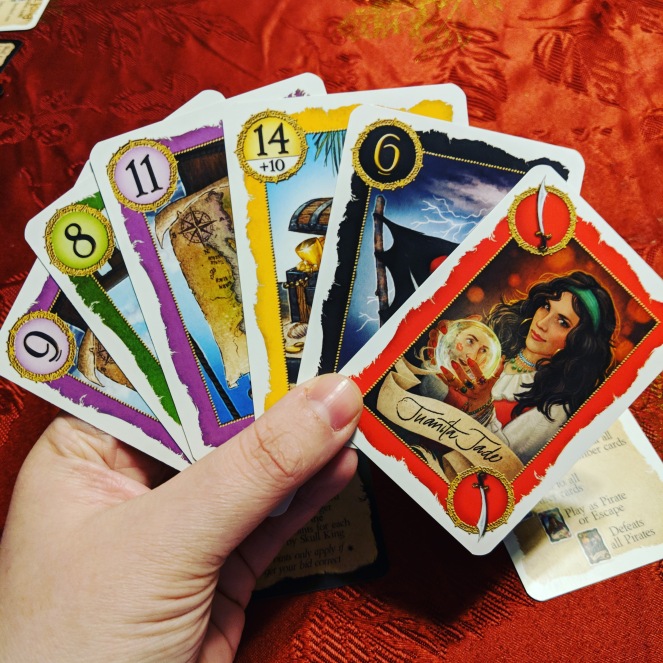 Set up is easy for this game. Shuffle all the pirate cards, escape cards, Tigress and Skull King and all four suits into one deck. Then hand the deck and the bidding cards to the dealer. Give the scoring pad to someone who is good at quick math. Then deal one card to each player.

Once players have their card they will look at it and decide what they will bid. They will bid how many tricks they will take in the round. For instance, in the first round players will either bid zero or one. Players will make this decision based on the suit and numerical value of the cards in their hand. Let’s take a closer look at the suits:

After placing a bid, the player to the left of the dealer will lead. The first suit played will be the leading suit. Players who have a card of that suit must either play a card in the leading suit or a special card (Pirate, Escape, Skull King or Tigress). Once all players have played a card, the players will decide who takes the trick. Once players have no more cards in their hand, they determine whether their bid was correct or not.

The scorer will then write in the score for each player next to the correct round on the score pad. Players will score points based on how they bid:

Once the score has been updated, players will prepare for the next round. During the subsequent rounds players will deal one more card to each player each round. The last round players should have ten cards total.

There is also an expansion included in the game that adds additional types of cards and special abilities for some cards.

The components in Skull King are both simple and effective. The game comes with the deck of cards, bidding cards, player aids, a score pad and rule book. All of the cards were bright and inviting while still being easy to distinguish and read. While I mentioned that each suit is colored, each of the suits also has a specific artwork associated with it. This means that the game is also color blind accessible.  Also, I really loved the family touches that were included in the game. Each of the Pirates is a family member from the publishing company. I love when games include those personal touches.

The steps taken to help players understand game play were also a nice touch. Personally, I love when games include a player aid. Even when games are simple, they help new players easily follow game play. The addition of the bidding cards is also a wonderful visual reminder to players on how many cards they bid each round. This way players cannot forget how many tricks they should be trying to take.

The score pad seems a little complicated at first, but the rule book has a nice diagram explaining exactly what goes into each box. If players are concerned about running out of score pads, they will be able to laminate one to keep long term.

Skull King has been a wonderful addition to my collection. It provides a great bridge from traditional card games to modern board games. Players who enjoy Spades, will likely enjoy and quickly pick up on Skull King. This meant for me that it would be easy to teach even to my grandparents, who have always enjoyed card games. Beyond the familiarity, it is also easy to teach to those who may have never played a trick taking game before.

The ease of teaching is helped by including aids such as the player aid and bidding cards. Additionally having a basic mode with limited cards and straight forward abilities means that the game can easily be taught to non gamers. However, as players become more familiar with the game it can be played with the expansion which provides more advanced play. I especially like the addition of each pirate having a special ability in the advanced mode. It adds another layer of strategy.

Beyond being versatile in that way, it also demonstrates versatility by being a small box game that has a small foot print. It could easily be played at a bar, picnic or other outing. The box is small enough to throw in a purse or small bag too, so it would be easy to bring to these occasions. It also plays at a wide range of players, and plays well at most player counts. However, I would say that it plays best at 4-6 players.

If players dislike luck based elements in their game, they may not enjoy Skull King or the trick taking genre. While players can strategize to the best of their ability, some of the game comes down to the luck of what other players have. Additionally, players who dislike the inclusion of a score pad rather than tracker of other sorts may be disappointed. The score pad includes many sheets, but it is possible to run out of them eventually.

However, I would suggest Skull King to my friends and family. It is a quick game that helps build a bridge between modern gaming and traditional card games. Players who enjoy trick taking games such as Spades, Pikoko, or Oh Hell! will likely enjoy Skull King. Also, players who enjoy pirate themed games as much as I do will enjoy the aesthetics of the game.

5 thoughts on “Review of Skull King”