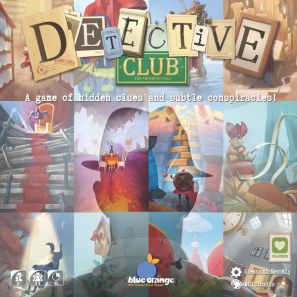 You have been invited to try to join the ranks of the Detective Club. First you must prove yourself a worthy detective though by analyzing evidence, listening to eye witness accounts and deciphering who is the liar among you.

Detective Club is simple social deduction party game. Before the game begins, make sure each player has a hand of six cards, as well as a player marker and voting chip in their color. The player market and voting chips will be placed in front of the players, and then the players are ready to begin. Throughout the game, players will be taking on three different roles. Those roles include the Informer, the Detectives and the Conspirator.

The Informer acts as a game master for the current round and will also be the first player. They will take a look at the cards in their hand, looking for at least two cards with a similar theme, subject matter or feeling to them. Once they have found two cards, they will take the appropriate number of notepads and write the same word on all of them but one. The final notepad will be left blank. The word written should match the cards selected from their hand. They want this word to be easy to decipher because they are working with the Conspirator.

Once the Informer has written the words down, they will shuffle the note pads and hand one to each other player. The players who receive a notepad with the word become Detectives, the player who receives the notepad without the word becomes the Conspirator. After all players have had the opportunity to look at their notepad in secret, the Informer will place one of their cards down on their player marker.

All other players will then analyze their cards, and pick  one that they either know fits with the theme, or they are able to guess might work with the theme based on what others are playing. One at a time, they will place their card on their player marker. Then, players will do the same thing a second time, until all players have two cards face down in front of them. Whenever a player plays a card, they should replenish their hands.

Players will repeat this process until all players have been the Informer once (in games with six or more players) or twice (in games with four or five players). The winner is the person with the most points at the end.

Detective Club comes with a few simple, but well made components. The first component is what captured my attention and is the star of the game. That component is the 168 evidence cards included with the game. For those unfamiliar with Oleksandr Nevskiy, he was also the designer behind Mysterium, and the evidence cards have a very similar surreal feeling to them as the clue cards in Mysterium. They will also appeal to fans of Dixit and Muse, as the art style feels very much the same as those two games.

Also included are the eight player markers and voting chips. The player markers are high quality and do their job well without taking up too much space. The voting chips being magnifying glasses was a fun, thematic touch. Another important thing to note is the punch board that came with the game is some of the best I have seen. It was incredibly easy to punch, and no damage was done to any of the cardboard.

The game also includes two options for the notepads. The first being physical pads of paper and pencils. These are practical and there are plenty to use for a long time. For those who don’t enjoy pads of paper in games though, they also include an app. The app is free to use, and also very user friendly. I was impressed with this solution for paper score pads, and it helps the game’s longevity. Detective Club is simply a delightful game. I have played a variety of games that feel similar ( Spyfall/ Fake Artist Goes to New York/ Codenames) but this one stood out as an improvement and more balanced solution without overly complicating the game.

I was especially fond of the fact that before any voting happens, players have full knowledge of what the word was, and are given the opportunity to explain their ideas before any voting happens. While this does tend to favor players who are good at thinking on their feet, I do feel like the mechanic takes away some aspects of luck that the other similar games feature. Additionally, I like that the Informer role always goes first, giving the Conspirator an opportunity to gain information before acting.

Despite the fact that the luck factor is lessened in this style of play, it still comes into play because of the card draws. There have been many times as the Conspirator or a Detective where I lost the round because I simply was not able to draw cards to fit with the word. While this does make for some amusing explanations, it can be frustrating when those around you seem to have the perfect card for the scenario. However, that luck can also add depth to the game. It provides a challenge for players to properly explain abstract ideas to make their fellow players believe them.

Another thing I have found that makes the game enjoyable, is the possibility of mixing the evidence cards from detective cards with cards from Dixit, When I Dream, Mysterium or Muse. The game does not rely on keeping the cards in hand a secret, so having different backs on cards does not really matter. I love the idea of mixing the cards from different games to continue to add replayability to the game and provide different possible combinations and themes. While this is not needed because there are already 168 cards to combine, the fact that there is potential to dive further into the game makes me excited as a player. I also hope to see further expansions that will add cards in the future.

Finally, one important thing to me is that the game feels balanced. While I adore Spyfall and have enjoyed playing it both at home and in the classroom, I often find that being the spy brings on a sense of dread. The game does not feel as balanced as I would like, and I was worried that Detective Club would have the same feel to it. I found however that in Detective Club, there was a fairly even balance between the Conspirator winning and the Detectives. I think the addition of the open information and explanation phase really helps round out the game play.

If you are a fan of social deduction games or lighter party games, Detective Club might be a good fit for your collection. It is exceedingly easy to play while supporting a large number of players, and it feels similar to many of the games already available on the market. The beautiful artwork also makes it have a great table presence. If you are a fan of any of the games mentioned throughout the review including Mysterium, Codenames, Muse, When I Dream, A Fake Artist Goes to New York or Spyfall, I highly suggest picking up Detective Club.

Another reason I was excited after the first few plays of Detective Club was because it has a lot of potential for use in the classroom. I am already hoping to get my hands on three more copies so that I can put a lesson into place. As an English teacher, I think there are many opportunities to use this game to help students develop claims relating to a thematic topic which could eventually be expanded to a thematic statement.

As a seventh grade teacher who is working to teach argumentative writing, the use of this game could help build a bridge for reluctant readers to support their ideas with evidence from text and other media. I intend to introduce the game and the rules, having students play a few rounds. Then, after each player has had the opportunity to play as the Informer, I will teach a mini lesson on argumentative writing using evidence to support a claim. I will break down what reasoning has seemed to work with my students, and what reasoning has not helped my students support their arguments. After my students have discussed, I will have them return to their game and play a second round.

When the students get to the final turn, I will have them write a claim to support their evidence rather than just discuss it verbally. The simple claim will look something like “The image supports the word nature because of the heavy focus on the color green. When people think of nature, they tend to think of greenery and forests”. While this is a relatively basic use of claim and evidence, I am hoping that this will help break barriers and make working on supporting claims with written evidence easier.

The standard I am hoping to support with this is “CCSS.ELA-LITERACY.W.7.1.B Support claim(s) with logical reasoning and relevant evidence, using accurate, credible sources and demonstrating an understanding of the topic or text.” Though it could be implemented differently to support different learning goals.