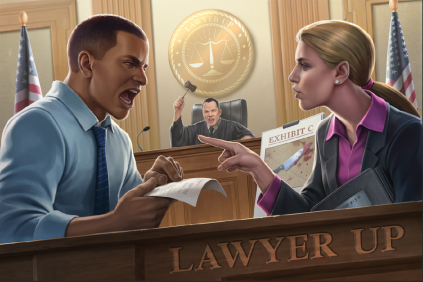 Lawyer Up is a courtroom drama game where you take on the side of either the prosecution or the defense. Prepare to call witnesses, supply evidence and sway jurors.

Lawyer Up is a card drafting game for two players. When setting up, players will choose a case number and follow set up instructions for that particular case. Once the game is set up, players will begin the Discovery Phase.

Procedure Cards are another kind of card that might be played during this phase. They can be played in one of two ways. First, it can be played as an Examination Card with all Bias Symbols, however it has no special ability. The other way it can be played is as a Procedure. These are cards that have a special action that can be used on a later turn.

Additionally, players may use their action to activate a Procedure or use their Sidebar Token. The Sidebar Token allows players to flip the Judge to favorable and draw a card. Players may also Object to the other player’s Argument or Procedure Card three times per game. When a player objects to one of these cards, it is removed from play and discarded. That player must then take another action.

Once both players have passed, the Resolving a Witness Step begins. There are six parts to this step of the game. First, players must determine total influence. The player with the highest influence wins the witness. Second, players resolve any Victory or Defeat Effects from the last card played or on the witness card. Third, the winning player will spend Influence to sway Bias. The player who won the Witness will subtract their opponents total influence from their own. The difference between the two is the number of points a player may spend to sway the Jurors. Each juror can be swayed one space by spending Influence equal to their Skepticism value. Fourth, players take all the cards in their examination and place them in their discard pile. Additionally, players will refresh their Sidebar Token, and flip the judge so that they are agreeable to the person who lost the Witness. After this, players may discard any cards in their hand and draw up to their hand limit. The default for this is five. Finally, the player who lost the last witness, calls a new witness. Then players will restart the Examination Step.

Gameplay continues like this until either an end condition for the case has been met, or all witnesses have been called. Once this condition is met, players will go to the Closing Statements Phase when applicable and determine the winner based on the case’s description.

***I received a prototype for review, all components and rules are subject to change**

Lawyer Up has a wonderful art style. I found it to be very thematic and it worked well to depict the information needed. The symbols made sense throughout, and the cards were easy to read and decipher.

One thing I would have liked to see was a reference card for the order in which play proceeds and defining actions. The game is fairly complex for a small box card game, and I think new players would benefit from having these reminders in front of them.

Growing up in a household with a lawyer, I was excited to see a thematic courtroom based game. For being a small box game, I was very pleasantly surprised to see just how thematic the game was. The structure of the game mimics a court case very well, and it makes players feel engaged with it.

That being said, the game is carried solely by its theme. There is a great deal of depth of strategy in the game, and players who draft poorly at the beginning will definitely feel that throughout. I think that because of this learning curve, I would not suggest Lawyer Up for inexperienced players. I quickly found that players who had played the game more generally had a better idea of the biases they might need, and thus played better throughout. Players who don’t draft carefully could be feeling the frustration throughout, as it is a long game.

The game does tend to feel a little long for what I would expect from a small box card drafting game. While the game can be under an hour with more experienced players, with new players I found that the game took around an hour and a half to play. It makes it difficult to be an easy after work game for couples, but I really enjoyed the depth of gameplay it provided as a trade off.

Another thing that made learning the game take longer than I would have liked was the layout of the rule book. While this may just be personal preference, I prefer when rule books are laid out so that the gameplay is first, with card examples throughout or after all gameplay has been explained. This rule book focused on showing each type of card before even introducing anything about how to play. It seemed like too much information before knowing what to use the cards for. I would have liked to see the cards explained at the relevant points in the rule book or towards the end for reference after understanding the order of play. When I first sat down to play the game, I realized that the rule book would take more dissecting than time that I had to learn, so I had to put it aside which is something I rarely do.

Overall, if you are someone who enjoys playing two player games, but struggles to find one with a challenging depth of strategy, this is the game for you. The different cases provide a lot of replayability, and each game takes significant planning and strategy. While the game runs a little long, what you get in return is an engaging experience as players are carefully balancing when to play cards, how to chain abilities, and when to sway jurors in their favor. For more information, be sure to check out Lawyer Up’s Kickstarter on March 17th.