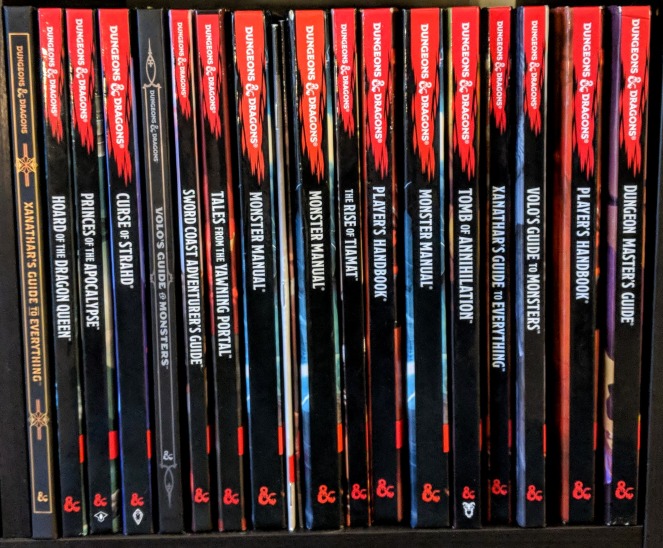 It’s Saturday! Saturday means I will spend my day playing Dungeons and Dragons. I figure why not write about it as well? The majority of time that I have spent playing D&D has been playing Adventurers League (AL) with the exception of a a few campaigns and play tests we have done. If you want to learn more about what Adventurers League is follow this link. It will give you the players guide and some background information on the differences in play between AL and home brew. Between the different campaigns I have played I have come with with a few pros and cons for the program.

The main key to AL play is consistency. Adventurers League focuses on players being able to have a consistent enough experience at any table to be able to come and go to different tables and different sessions without difficulty.  It is a wonderful program, especially for those new to D&D and for those who have no consistent campaigning group. It provides players with structure and the capability to find a group of people they really enjoy playing with. My first ever game was an AL game at a local gaming store. In that campaign over time we had over 15 people come and go over time. It also benefits new players because there are limits on how many people can play. A new player will be able to have their voice heard when there is only a maximum of seven players at a table.

Players who are experienced or have a committed group though may also find benefits in playing Adventurers League. The organization allows players to interact in a larger community. People who frequent conventions will find that majority of games ran at conventions do enforce AL rulings. Additionally, players can interact online with the larger community. There are trade groups, online play, and various places to discuss rulings and questions. Plus, there is a lot of content and modules that adventurers league releases.

That being said consistency can also be very restrictive. Adventurers League uses strict rules to contain Dungeons and Dragons shenanigans. When creating characters, a player is only permitted to use the point buy system. The can also only use the Players Handbook and one additional source book for character creation. You want to have a Goblin Warwizard? Too bad, it would not be allowed by Adventurers League guidelines. Now there are some ways around this with certifications, but for the most part you are limited to those rules. There are also limits on how magic items can be given away, what items players can take, and in the case of the modules the experience that must be given. It makes sense to try and keep power gamers in check, however it does limit the creative freedoms of both players and dms alike.

Despite careful planning, sometimes shenanigans ensue. I participated in an AL version of Out of the Abyss and some crazy things happened during it. I would not elude to what those things are in hopes that I do not spoil the book for you, but my character came out of it with some things that typically would not happen in Adventurers League play. It has gotten to the point where I can barely play this character at conventions because whenever I sit at a table, someone asks “how is that possible” and I explain. Then they give me those “you’re a power gamer cheating scum” eyes and glare at me the remainder of the game. While I may look sketchy, I promise you I am not the kind of sketchy that cheats at a game. When stuff like that happens people in AL can be very hostile. Especially those who have not played many of the books. There can also be hostility when competing for magic items at the end of each session. I have been at many tables where people have lied about their magic item count to get an item.

I would suggest trying Adventurers League if you have never played it though. I have met some amazing friends at conventions and at local stores playing. It is how I met my current playing group actually. Plus, it gives me another reason to look forward to conventions. For instance, just yesterday I had an AL friend reach out to us to see if we were going to Gencon again. It is the only time we see him, but we meet and have drinks at every Gencon. This has become apart of our tradition. While the limitations may hold certain aspects of play back, it expands the community of D&D and provides opportunities for playing with new and diverse people.

Now for a bullet pointed summary…