These large conventions provide a unique experience that I think everyone should experience at least once. However, then there are smaller more local conventions who provide a completely different experience. As someone who attends multiple conventions each year, I wanted to delve further into what are the major differences and benefits of each type of convention. If you are relatively new to board games, or you are thinking about attending a convention for the first time, I hope that this brief description may help you decide what kind of convention to attend.

Lets talk first about the big guys. The conventions in the scope of the ones I listed in the first paragraph have a very different vibe from small local conventions. When you attend a large convention, there are somethings you should be aware of. First, it is going to be more expensive then the smaller local cons. Everything from hotels, badges, events and even transportation services like Uber will be more costly than smaller conventions.

However with that cost, you will get access to the new hotness. Generally at large conventions like those listed, attendees can visit booths from most of their favorite publishers and designers. It is a great way to see the variety of games available in once place. Additionally at these conventions publishers will often announce new board games or release new games. This will give you the opportunity to try and buy games before they are readily available.

With so many different publishers available, and so many attendees running and playing games you will find that there is a lot of variety in events being ran. Often times if you have a niche gaming interest, you can still find people to play with at these large gaming conventions.

The downside to many of the large conventions is that there often is not as much space to just sit down and play games. The sheer number of events and vendors tend to take up a lot of space, so there is less dedicated time and space to people who just want to bring a board game and sit down with some people to play. That is not to say that people don’t find space, but it is less readily available. 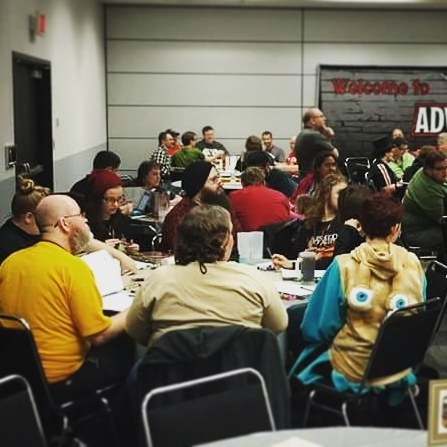 In the United States, there are small gaming conventions that happen in almost every state. For the purpose of this blog, I am going to talk about the Midwest, because it is what I am familiar with. However, through talking to many others I find that the experiences I talk about are fairly consistent with small conventions. These small conventions can range from conventions with a specific focus like Adepticon in Schaumburg which focuses on miniature war gaming, or conventions like Gary Con which has a slight focus on RPGS all the way to conventions like Geekway to the West which provides on open gaming experience to all players.

There are a lot of benefits to attending small conventions that players may not see at the larger conventions that they attend. One obvious benefit is they are a lot less expensive. Badges and hotels for these kinds of conventions tend to be significantly less expensive than their larger counterparts. Additionally, players will find that despite the fact that there is less event variety, most of the time smaller conventions have a large open play space. This allows players to sit down and play games often with little to no charge. If players did not bring games, most small conventions have some sort of play to win library that they are able to play and potentially win in a drawing at the end of the convention.

Beyond open gaming, players will find that when attending small conventions they are frequently able to meet people who live relatively close to them. This expands the ability to become more involved and continue to play with these people after the convention ends. This is different from other larger conventions, which tend to draw people from all around the world, rather than a select area.

The downside of a smaller conventions is less variety. Players will generally find that there is limited variety in the events that they can sign up for, and the vendors in the dealer hall. Often times at smaller conventions the dealer hall consists of local game stores and artists, rather than publishers. However, many indie designers may set up booths at local conventions and it is a good way to meet designers local to the area. The upside of small conventions when it comes to events though is that with less people fighting for each slot, so event registration is less frustrating and more rewarding.

Some small conventions I plan on attending next year are Gamehole Con, Gary Con, and Geekway to the West. If you are local in the Midwest area, I highly suggest those conventions. The first two I tend to focus on RPGs, where Geekway is focused more on general board gaming. In fact, Gamehole Con’s badge registration is going live this weekend, so if you are looking for a great place to play some Dungeons and Dragons, try new games in their demo row , do some play to win games,  or play a game in the Gencon gaming library which is present there as well.

I suggest taking a look at your local small gaming conventions if you are looking to have a good weekend playing games with new people. If you are new to an area, small gaming conventions can help you reach out and meet new people in your area that you may want to game with afterwards. Additionally, you can meet designers in your area and develop relationships with people in the industry that are local to you.

I can’t say which kind of convention is better. I will say that both offer great, but very different gaming experiences. Both kinds of conventions have their place and offer benefits to a gamer. However, players may be disappointed if they go into conventions with the wrong kinds of expectations.  If it is your first time attending Gencon or any convention, I suggest reading my article about Gencon Failures, which may help prevent you from making the same mistakes I have made. Happy gaming everyone, and those of you at Origins this weekend, have a blast!