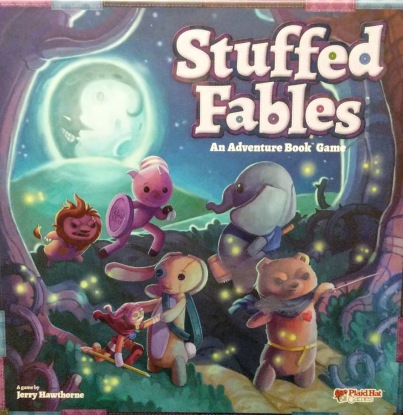 The day has finally come. Your little girl has grown out of her crib into her big girl bed. It is now time for you to step into your real role in the bedroom, defending her from the monsters in the night. You are a Stuffie, charged with the protection of your little girl while she sleeps.  However, Crepitus is lurking in the shadows ready to jump at any chance he gets to give the little girl nightmares. Will you be able to adventure the realms, defeat the crawlies and save your little girl? 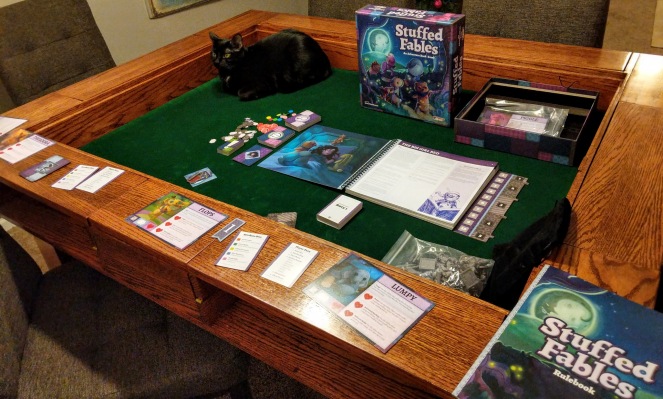 Stuffed Fables is played out of a book, on which one side will give the players background story and game play mechanics, the other side will be the playing board for that specific page. When the game begins, players will read through the first section on the first page of their story.  It will give instructions for how to set the play board up, and if there are any Stuffies that cannot yet be played by players.

Once everything is set up according to the story, then players will take turns starting with the book keeper. There are six steps to a turn: Draw Dice, Find Stuffing, Place Threat, Perform Actions, Discard Dice and Check Threat. Each action must happen in that order, so players will start by drawing dice. Each dice has a different color, which signifies a different special action that dice can take. White dice represent stuffing, black dice represent threat, red dice are used for strength tests and melee combat, green dice are used for agility tests and ranged attacks, yellow dice are used for perception checks and searching the room, blue dice are used for resistance but have no special action, and purple dice are wild and can be used as a substitute for other colors.

Now what does all that mean? Lets take a closer look at the turn phases and that will help clear up any confusion.

Draw Dice: Players will draw five dice from the black bag. If there are no dice left, return discarded dice to bag and then draw five dice.

Find Stuffing: Roll any WHITE dice that you picked when drawing dice. If the number you roll is greater than or equal to the number of stuffing (health) on your player board you gain a new stuffing. Players start the game with five stuffing.

Place Threat: Place any black dice pulled from the bag on the threat tracker, located on the side board. Do not roll these dice until the story tells you to do so.

Perform Actions: There are seven actions that can be performed during this phase, and you can do as many as your remaining dice allow you to do.

Discard Dice: Players must discard all remaining dice into a discard pool, not back into the bag.

Check Threat: Players must look to see if there are black dice on the threat tracker that are great than or equal to the number of minions in play. If there are, then the minions get a turn to attack. If not the next player goes. In the case where there are no minions, players still check threat. In this case, if the threat is equal to or greater than the number of Stuffies in play then a surge happens. The outcome of a surge is dependent on each story page, but it always has a negative impact on the players.

Once a player has completed these six actions, play transfers to the next player. This continues until players have met the page goal or until they trigger an event on the board that gives them a new task. After completing a page, the book keeper will pass the token to the next player who will then become the first player.

However, if the threat goes off then the minions get a turn. In order to do a minions turn, players roll the black dice by the minion on the tracker. They will then check the number, and do the series of events listed next to that number. Most of the time this includes movement, and either a melee or ranged attack. Players will do this for each minion until all have gone. If a minion manages to deplete a Stuffie of stuffing during an attack, that Stuffie collapses. If all Stuffies collapse players lose the game. When a Stuffie is collapsed it must return all hearts, buttons and condition cards. Then on their turn they may only roll for stuffing and check the threat level until they gain stuffing or until another player encourages and give them stuffing.

Play continues like this until the story is completed or until players lose.

Stuffed Fables comes with a variety of components, including miniatures, colored dice, several decks of cards and a bound storybook. The production value in this game is very high, with the components looking visually stunning but also being sturdy and well made. Aesthetically, the game is colorful with a lot of components that will draw the eyes around the board.  The components also support the theme flawlessly, from the stuffing health to the button money.

If you enjoy miniature painting, this game comes with 23 miniatures to paint. This includes six cute Stuffies, and seventeen creepy minions. The quality of the miniatures is good for painting, with enough detail to make them a quick and enjoyable paint session. 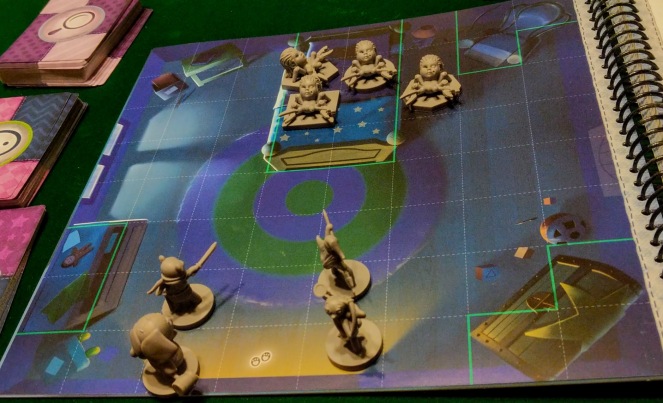 Stuffed Fables is the spiritual successor to Mice and Mystics, which is also a wonderful family friendly game. Stuffed Fables presents the fighting and adventuring in a way that is appropriate for young children and the story is engaging for very young children. However, the rules set is probably too complicated for children until six years old without heavy guidance from parents. This becomes a problem, because the theme of the game may not connect as well with older children. They will not be as engaged with a little girl going from a crib to a big girl bed. Arguably children will be most thematically engaged with this game between four and seven years old. Rules wise children will probably not be able to play semi-independently until seven or eight years old. This of course depends on your child.

Another struggle families may face is the language driven focus on the story throughout the game. While the game may at some point be translated into other languages, it is currently only available in English.  This can be a major roadblock for parents teaching this game to their children who do not speak English. There would be too much text to translate and still have an enjoyable game play experience. That being said, this is a wonderful choice for children learning to read, as the text is simple enough that with parental help the child should be able to read along in the story and participate as the book keeper.

My final concern for Stuffed Fables would be the time that it takes to complete one scenario. Each story has several pages of game play for players, which is wonderful. Within each story there are several paths that players can take which will change how the story unfolds. This adds a lot of replay ability, as no two stories will be exactly the same. This variability is great, however with those several pages also comes a long play time. Some stories may take as long as two and a half hours to complete. This is often too long for young gamers. I would love to see a save feature in this game, similar to Time Stories, that would allow players to pause where they are and pick up at another time.

Despite those three minor but valid concerns, Stuffed Fables is an enjoyable game. As an adult, I was still able to immerse myself in the story and enjoy the outcome to taking various paths and making different decisions each game. It requires both strategy and luck to complete the game efficiently. The game provides an immersive and thematic experience with an interesting take on the dreamworld theme. I would enjoy seeing this game continue to expand into other stories, as its charm has ensured that it is consistently played at our house.