Just like that I am back from five wonderful days in gaming. Thank you all for staying with me despite the lull in content, but I have plenty to share now. How this upcoming week will work is I will start by giving a general overview of my weekend, giving you an idea of everything I saw or did. I will do this over the course of the next two days, so that it is not a completely overwhelming post.  Then later in the week I will start doing reviews and overviews of the games I demoed so you can read individually about each. Feel free to ask questions about any game though!

This year was the first that I drove into Indy on Wednesday instead of Thursday. While there is often limited things to do on Wednesday, it is great to be settled into a hotel and able to wake up early Thursday to be a part of the opening ceremonies. I was lucky, because I had already shipped my badge and the majority of my tickets to me. However on Wednesday by 6pm the line for Will Call was wrapped all the way through the convention center and out the door, so those who waited to pick up tickets had a rough Wednesday night/ Thursday morning.

Instead of waiting in line Wednesday, I started to get my bearings. I did a quick tour of the parts of the ICC that I could access. Reminding myself of which escalators lead to which skywalks and which hotels. I have a terrible sense of direction and I had events in the JW, the Marriott and the Embassy so it was important to be able to find my way. Then we headed out for a lunch at Kilroys, a bar around a block from the convention center. They have the best pizza breadsticks, so we indulged in those and headed back to the convention center for a quick nap after the long drive.

Afterwards we met up with some friends for dinner at The Old Spaghetti Factory, had some quick dinner then headed back to the JW where we were staying. We headed to the third floor open gaming and started to set up Villianous, but then were kicked out to the hall because it turns out the ballroom was not yet open. We still played Villanious, which had wonderful player interaction and asymmetrical play. We then played a few rounds of Fantasy Realms and No Thanks. Finally it was off to bed for the excitement the next day. 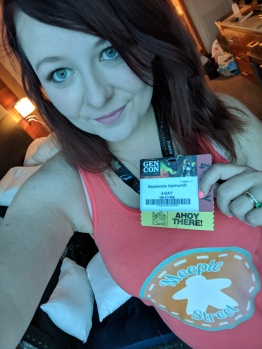 I woke up bright and early Thursday, and headed down to Bee Coffee to get some energy in a cup before the long day ahead of me. They have excellent coffee, but the line gets pretty crazy throughout the weekend. Then went back to the hotel to get ready for the day. Around 9am we headed to the ICC to watch the opening ceremonies. It was already packed with people littered playing board games, switches and taking pictures. I opted for a second floor view, as I did not want to be in the mad rush to get in. There was nothing limited that I was that desperate for.

Instead I watched the opening ceremony with a birds eye view and video taped the wall of gamers rushing into the exhibit hall. It was something cool to see, but not something I 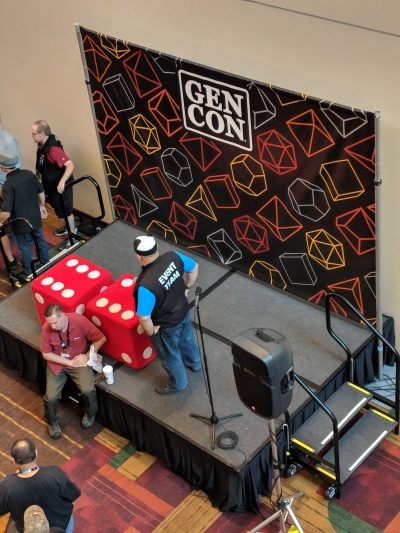 would want to be in the middle of. After about five minutes the rush died down and I meandered into the exhibit hall with my husband. I did not plan a route for my first trip through the exhibit hall, but I did want to get to the Starling Games booth relatively quickly to pick up a copy of Everdell, so I did that first. Then I headed to Blue Orange Games to pick up a copy of Giant Queendomino, Blue Lagoon and Age of Giants. I finally headed to Iello and was able to meet their very friendly social media manager, Dayanna. Her enthusiasm for gaming was contagious and I left the booth feeling even more excited for the weekend ahead of me. While at their booth I grabbed Raids and The Legend of the Cherry Tree. Suddenly I looked down and I was hauling too many games so we ran up to the hotel room dropped off our loot and headed back downstairs. My husband and friend then took off to their D&D Adventures League Track. 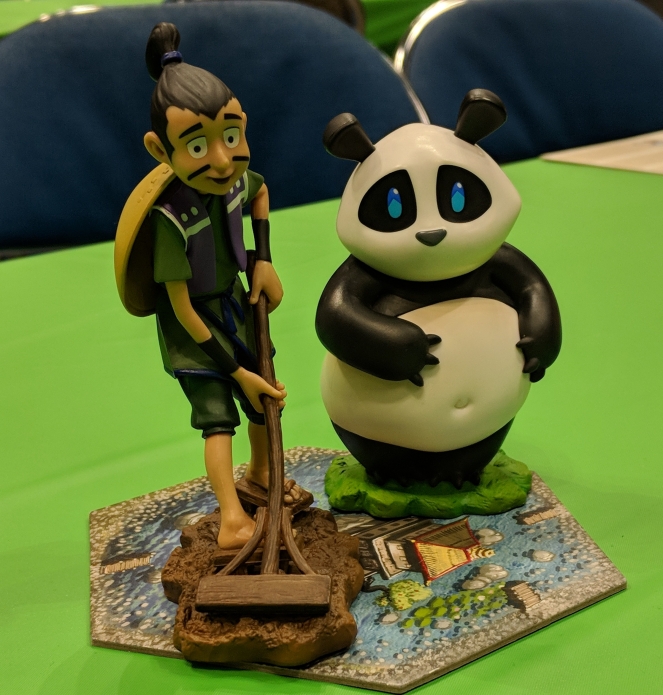 Once alone I headed back to the ICC to do my first scheduled event of the day: Giant Takenoko. I have a love for Giant sized games, but one of the major reasons I decided to try this one was because it included the Chibi Expansion. The Giant sized pieces were really cool, but with the exception of adding some tiles that gave new mechanics, I was underwhelmed with the expansion. I felt that the baby pandas hardly came into play and that the momma did not do very much at all. It was still cool to try though!

During this break, I had a hour to explore the exhibit hall. This time I was not in a hurry to get to any specific booth. I took some time just to familiarize myself with the layout, and stopped to listen to some explanations of different games that I was not familiar with. It was during this time that I checked out the CMON booth and saw their giant Cthulhu Miniature, listened to explanations of Monarch by Resonym, Celestial by Dimension Games and stopped by the Games Adults Play booth. While there I demoed Shit Happens and learned more about their other titles. Brooke was awesome about answering all of my questions and I left the booth with most of their games to try and review.

Another quick stop the the hotel, then I was off to my second planned event of the day.  It was a learn to play Cat Lady event, hosted by AEG. The volunteer that was supposed to be teaching the event never showed up. Someone stepped in to teach the game but did so in a manner that was wrong. I ended up browsing the rule book on my own after the game. We played completely wrong and I did not enjoy the demo, but I think I would enjoy the actual game play.  I can’t say for sure unless I actually play it though!

After the  hour long event, I went to meet with John and Kristen at Hrothgar’s Hoard regarding their new product for their upcoming Kickstarter. They will be releasing a line of wands that have storage space inside of them for things that RPG players might find helpful like miniature dice or small pens/ pencils. The product was handmade, and done with a lot of quality! I was very impressed and am looking forward to their upcoming Kickstarter. I will be giving a full review of the product before it goes live. 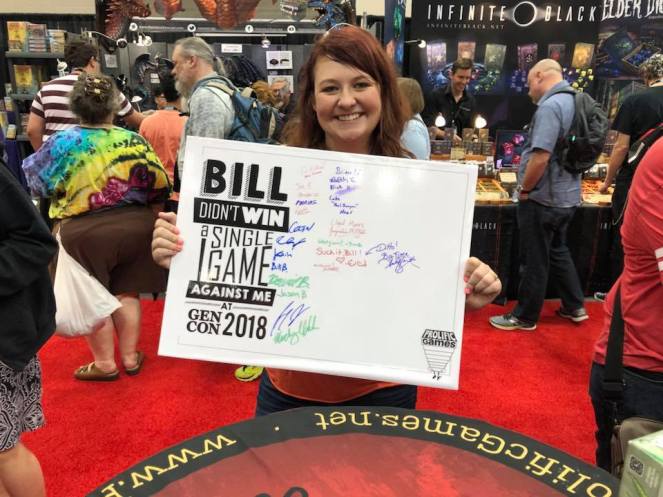 I found myself back in the Exhibit Hall, so I continued my day one meander. This time I walked over to the Prolific Games booth, as we always check in with them at conventions. They are the creators of Witch Slapped which you will occasionally see on my Instagram. This time I demoed Cultists and Cthulhu and signed the sign to get back at Bill who wasn’t able to make it this year. It was a fun twist especially for gamers who see them consistently at conventions.

Directly next to Prolific Games was Top Shelf Gamer’s booth. I love their upgrades, and their customer service. They always treat customers with the greatest respect. I was able to meet the owner of the company Chad, their social media manager who I have chatted with many times online Sky. Both were incredibly friendly and took a few minutes to chat. It always feels good knowing that you are supporting companies that are so passionate about their customers and their product.

Once I finished speaking with Top Shelf Gamer, I headed back to the hotel to meet my husband and our friend. We grabbed a quick bite to eat at the Food Trucks and headed over to the Board Game Geek hotroom, and checked out their selection of games. We did not have long to play because we then had Scythe Night Scheduled from 8-11. We went back to the hotel to grab Scythe and went off to the Marriott. Once there we met up with my friend Pia, who played Scythe with us. It was a lot of fun to share my copy of Scythe with people, and many people were excited about my painted miniatures. It felt nice to see other people’s excitement.

We played a five player round of Scythe. Pia won using Albion. I could not get my barings with Rusviet for some reason that night, but I didn’t mind. It was a great time regardless. After we finished and packed up the game we sat down for a round of Fantasy Realms which was still in my backpack from the night before. Jamey Stegmaier, the designer of Scythe sat down to play with us. It was nice to be able to play a game with him as he was very busy, and probably very tired by this point in the day! I know I was! After a round of Fantasy Realms we left the room set aside for Stonemaier’s open game night and went outside to play some Würfel Bohnanza, a quick dice game. By that point I was exhausted and ready for sleep so we headed back to the hotel. I walked over ten miles that day alone!