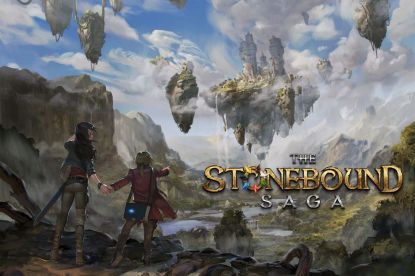 The land of Telios has been at war with the Tenebris for a seemingly endless period of time. The path of destruction following the war has left humanity struggling to hold onto the world as they knew it. However just as things seemed at their darkest moment, and faint glimmer of hope shone through.

Adventurers from all over the seven kingdoms of Telios began to gather where the once great city of Lux stood. In its place were speaking stones that drew the adventurers in groups of three into a fierce battlefield. Here the adventurers could prepare and train against one another to be prepared to battle the real threat, the Tenebris.

Players will be choosing a force to play against their opponent. In games that are three or more players, the players will divide into two teams to compete. For the purpose of this review, I will be detailing the set up and game play as though playing a two player game.

When setting up, players first have to decide what kind of game that they are interested in playing. There are three modes of play in The Stonebound Saga: Constructed, Draft, and Free Play.

In Constructed Play, players will be able to select three characters from the deck of 70 character options. Each of these character cards has a rating of 1-3 stars. When selecting characters, the player must have a maximum of 5 stars between the combined players.  This mode is suggested for players who are comfortable with the game mechanics and have a good grasp of some of the characters.

In Draft Play, players will separate characters by their star rating forming three separate decks. Then the cards are shuffled and five cards from each of the decks are laid out. Players then alternate selecting cards to form their team, until each person has three characters. This mode is suggested for new players who are not familiar with the character’s abilities or synergies. 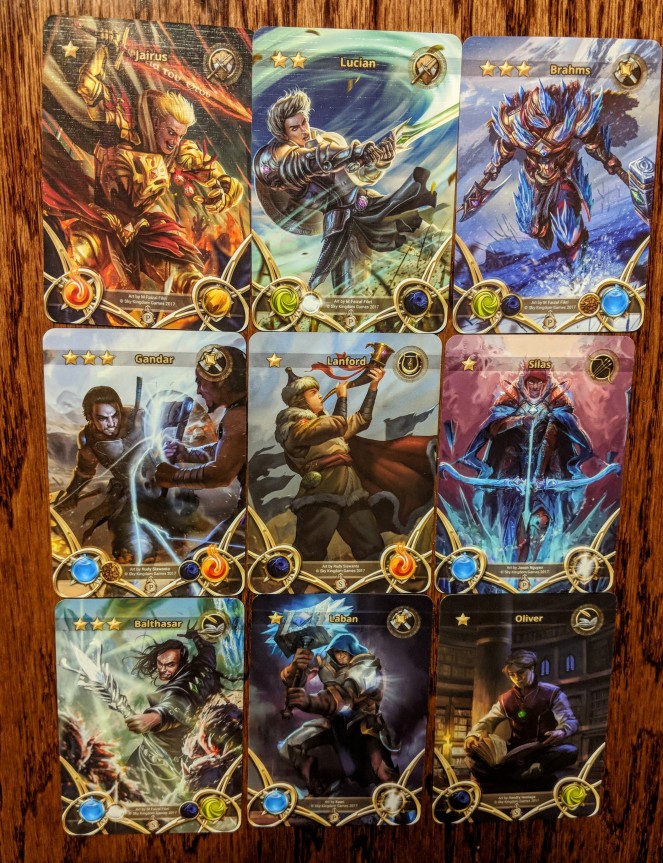 Within the 70 character cards, there are seven different classes which characters may come from. Each class has it’s own starting stats which are listed on the player mat. In addition to the player card with the card art, each character comes with two ability cards that will be placed in the player mat during game play. On the character card, and the ability cards players will notice colors which will represent resources the players will need to pay in the game to do certain abilities. It is a good idea when forming a team to have diverse resource colors because it helps ensure that all resources are useful. 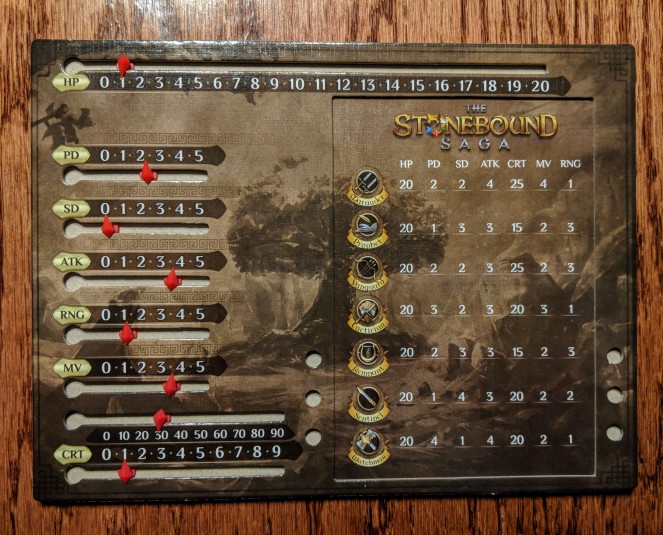 When setting up player mats players will first look for their player’s class marked by the symbol in the top right of the character card.  It will specify how to set your stats for each of your players. Then the player will place the offensive ability card on the top of the indented space on the player mat and the defensive card on the bottom of the player mat. One good way to know that your ability card is on the right spot is if the card that has FUSED abilities is on the bottom.

Players are then ready to begin the game. Turns are played in a series of five different steps. First players will draw seven speaking stone cards which will act as resources through out the game. Then players will activate a character. When activating a character players have four options of things to do with the character:

Once the player has completely activated one character, they will then activate any remaining characters on their team. Once all characters have gone players will have the opportunity to defuse any abilities to free up hand space. Finally players discard all remaining cards. Play then rotates to the next team to follow the same steps. One team should never activate more than three players at a time.

Play continues like this until one team has incapacitated the other team’s characters. The team left standing is the winner

The Stonebound Saga is truly a stunning game. Everything ranging from the character art, to the speaking stone art to the game board itself has been beautifully created to reflect a consistent theme. In addition to the beautiful art, the components are both aesthetically pleasing and functional.

I am especially fond of the player mats which are designed in a way that the sliders easily move, and the information players need before and during gameplay is easy to find and follow. The only thing I do wish was that the information presented in the center class list was in the same order that the stat trackers were top to bottom. It is easy to be following along and accidentally set a tracker to the wrong spot because they are in different orders.

The board is well made, and there are a few player mats players can purchase if they are looking to upgrade their game. It is easy to move the cards on both the board and the mats. Additionally the tokens are easy to distinguish and were some of the easiest tokens I have ever had the pleasure of punching.

It is clear from looking at the components that the game was a labor of love. Everything from the quality of art to the ease of organization was well thought out. It looks and feels great, and has a wonderful table presence.

Honestly I will admit when I first went to demo The Stonebound Saga, I was a little nervous. I don’t tend to gravitate towards skirmish style games, and when I do it tends to be because of the miniatures included. However after play testing the game, I was blown away by the tight game play mechanics, the strong player interaction and the various options for replay-ability. It had been on my to purchase list for a while and I am excited to have finally added it to my collection. In fact, if I had to keep only one skirmish game in my collection from here on out, it would be The Stonebound Saga, no questions asked.

There is so much that I really find I enjoy about the game. For instance, I am really fond of the combination of resource management into a skirmish game. The focus becomes on determining what is the best use of resources in any given situation. Players must decide each hand if it is better to focus on defense or offense. Even better though, players have an additional resource to manage: their hand size. The idea of incorporating hand size itself into the resource management side of the game is such an interesting concept. It plays so well because players really do feel the tension between having enough cards offensively and being able to defend themselves with fused abilities.

The tension is also seen in the set up processing when first selecting a team. There are so many different elements to consider such as classes, the colored elements they work best with, and if different abilities have synergy. There are so many different combinations that I think I could play every day for the next five years and still not see all of the possible combinations! This is really interesting, and could be a fun test in organized play. Players can really develop teams and strategies they are good with.  However that being said, because of the variety of abilities players may find themselves with cases of analysis paralysis. Each character plays in a unique way so while figuring out the best way to utilize abilities, play may slowdown somewhat. This means that rather than a 45 minute game, it can be a hour to an hour and a half long.

Despite the variety in the characters, it is clear that this was highly play tested. The mechanics and different abilities work together seemlessly. There is not really an element about the game that feels clunky. I love that there are proactive steps taken to help support game play like player aids and the classes being listed on every player board.

Beyond the mechanics, I also really like how accessible this game is. It is wonderful in that the speaking stones are different symbols as well as colors, so that a color blind person will easily be able to play. Additionally, there is a lot of representation in all classes of females. As a young woman, I really liked seeing women in the typical sword and board classes that are often overlooked in these kinds of games. However the one group that may be disappointed in this game are those who typically play solo. There is currently no solo mode available in the game.

I would wholeheartedly suggest The Stonebound Saga to anyone who enjoys skirmish games, or even those who enjoy real time strategy video games. A large part of what drew me so quickly into the game was it was reminiscent of the RTS games I played as a kid such as Age of Mythology. If you are only into board gaming you will enjoy The Stonebound Saga if you enjoy high fantasy games like Dungeons and Dragons or skirmish games like Blood Bowl or Guildball. This is especially true if in the past skirmish games may have been put aside because of the miniatures.

Sky Kingdom Games will also be launching the Kickstarter to the first expansion of this game, Visions of Telios, on September 25th 2018. If you are interested in picking up the base game and the expansion this would be a great time to do so!

79 thoughts on “Review of The Stonebound Saga”