It is no secret that I love Scythe. In fact, Scythe is by far the most played game in my collection. There are many reasons for that, but one major reason is the amount of replayability and variety that is represented in the base game and expansions. That being said, one thing the expansions have over looked until this point was the encounter cards. While there are plenty in the base game, my gaming group could probably quote almost all of them with the number of plays we have done. When Rise of Fenris was announced as the last expansion for Scythe, I had come to the conclusion we probably wouldn’t be seeing many new encounter cards, so I was very excited to hear the contest announced that would bring 32 new encounter cards to the game.

This box called Scythe Encounters is the result of that contest. Those who entered were able to select a piece of artwork done by the talented Jakub Rozalski and write an encounter card that they felt fit the artwork. Stonemaier Games then sorted through the options and picked the best match for each card, sometimes mixing and matching different entries to create the best possible card. Naturally given the opportunity to potentially have an impact on the game I love so much, I entered.

This was the card that inspired me that most. I loved the industrial feel of the card, and the idea that it might give more insight into the secrets of the Factory. My entry was not selected for the card, but I am not at all disappointed by that fact. After previewing some of the cards, I realized that I am actually very glad mine was not selected. The winning entries for the cards show a great deal of creativity, providing many new options for game play that have never been seen before.

My entry reflected many of the options that have been seen on prior cards, and I really like that these cards provide some brand new options and difficult decisions. For instance, I love the third option on this card “Sacrifice a Machine for the Greater Good”. A player may spend anywhere from 4-8 turns normally gaining two upgrades, which can be a vast investment in time. However, the idea of giving up five popularity can have a huge effect on end game scoring. Those difficult decisions will make playing these cards very interesting.

Many of the encounter cards in this pack also encourage a more aggressive strategy too, effecting other players’ game play in the process. If a player selected the second option on this card, players who typically rush for a Factory card may be out of luck. If a player drew this card early in the game, they have the potential to be the only on with a factory card. Taking all of the Factory cards out of the game, with the exception of the person who got this Encounter could cause a lot of animosity between players, and potentially a significant advantage to the player who drew the encounter. I would be interested to see a game that got this card early on, and how it would effect game play for the rest of the game. 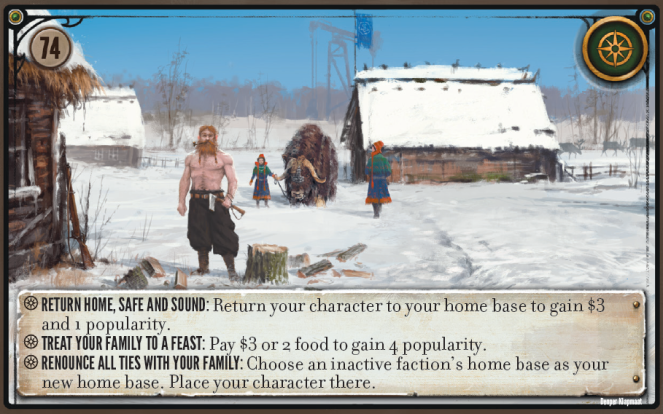 There are some other possibilities with the new encounter cards that many players probably would have never considered. Take for instance the card above that gives players the option to choose an inactive faction’s home as their own new home base. I personally have had many games where this would be a huge advantage and could potentially change the outcome of the game. Players who might find themselves sandwiched between two aggressive players could take this option as a possibility to expand with a little more flexibility.

Additionally, I am excited to see cards that encourage players to interact directly outside of combat and also pay attention to the various faction abilities. On this specific card, it would be hard to state my favorite option. All three could be helpful depending on the strategy players are using. However I am most excited about the first option “Greet the Visitors Warmly”. The idea of being able to use an encounter card on a future turn when it would be most beneficial provides interesting choices to players. I also like that it encourages new players to have an understanding of all of the factions and their different abilities.

That being said, the third option that provides a chance for direct player interaction also stands out to me.  The light take that aspect could really force players to adapt their strategy. As players rely move heavily on money to gain back popularity or produce, a loss of five coins could make a substantial difference in their turns. Generally I really appreciate when games give the option for direct player interaction, because it does keep players more engaged when it is not their turn. The good news though, is that players who don’t enjoy direct aggressive moves will still have other options available to them on this encounter card.

I also really enjoy how many of the cards connect the artwork so marvelously into the text, and many of them with good humor as well. In card 73, you can see that the first option is “Have Your Bear Help with the Harvest”. The idea that Wojtek is being put to work outside the battlefield can conjure some pretty amusing mental images. However, I like the fact that the option for your bear helping provides the least production value…after all how helpful would Wojtek really be?  The cards really build well within the text thematically. The options make sense, and the story text is really fitting with the cost and reward provided.  While the cards do provide many new options for players, they will easily fit into the cards already included in the game itself.

One thing that consistently impresses me with Scythe, is Jamey’s ability to let fans influence the game as it evolves. Considering the fact that two of the expansions are co-designed by people who created fan made expansions, it shouldn’t come as a surprise that he allowed fans of the game to have an influence on Scythe Encounters. However, that choice put new perspectives into the game and provides players with interesting decisions that may have not been seen if he designed the cards by himself. It also must be very exciting for these fans to be able to claim that they had a lasting impact on Scythe.

If you are someone who enjoys Scythe and are looking to add replayability into the game, I highly suggest taking a closer look at Scythe Encounters. The new cards will force even seasoned players to reconsider how they are playing. I personally cannot wait to get these cards to the table and put them to the test. I will be following Jamey’s suggestion and playing the first few games with the new cards only to see how the new options will effect game play. For those of you who are excited to hear more about Scythe Encounters and get your hands on a copy, I highly suggest signing up for the Stonemaier Game’s Newsletter so that you are notified when it is released. You can sign up by following this link, and pressing the button that says “Notify Me When It’s Available”. The announcement should be coming soon, and that is the best way to make sure that you get all the information needed!

7 thoughts on “Preview for Scythe Encounters”

Merry Christmas everyone! I hope you all enjoy a safe and happy holiday with plenty of gaming and time spent with those you love, either in person or digitally! We will be spending the day in the NICU with Atticus who is just over a month old now 🎅🏻
This Thanksgiving I have a lot to be grateful for and I just wanted to share. On November 24th, my baby Atticus Christopher Hoffman was born 12 weeks premature, weighing only 1 lb 13 oz. I’m incredibly grateful that he has come out with a passion for life and has started out his first few days in the NICU so strong. I’m incredibly grateful for all the doctors, nurses and medical staff for making sure that Atticus and I were safe when my pregnancy took a turn for the worst. Their kindness and compassion has been truly a blessing through my pregnancy and now into the recovery process. Finally, I’m thankful for everyone around me who has taken the time to send positive thoughts or feeling towards use during this time or has stepped in to help me when I wasn’t’t able to do something on my own. The support I have get from the people around me has truly reminded me of the good in 2020. I hope everyone in the USA celebrating today has a truly wonderful day and takes the time to reflect on some things to be grateful for despite this crazy year.
Enjoying our nightly round of Digital Scythe from @asmodeedigital! I am stuck in the hospital until I deliver our baby, probably for another four weeks or so, possibly more if things stay stable. It is so nice to still be able to enjoy playing a board game with my family from afar, especially when I won’t get to see them for the holidays now! Feeling super grateful for game apps to keep my spirits up!
Going to be spending a little time in the hospital for some observations..Trying to keep myself busy and keep my mind off things, so I’m looking for some new Full AI digital board game apps that have a good tutorial/help screen for rules. Does anyone have some that they love? I have iOS devices with me!
It’s review day! Today I released my review of the upcoming expansion to Wingspan that focuses on the Oceania Region! You can check out my full review on The Meeple Street, but I have to say that this expansion really elevated game play for us. The new player mat allows players to manipulate the bird cards available and the dice feeder, which is something I had been wanting to see since the base game. Additionally, the new yellow birds powers that activate at the end of the game, and the added nectar end of game points provide additional strategies for players to experiment with. The only thing I struggled with was storing the game (there were not many bags included, so it was difficult to keep organized and did not fit well back in the expansion box) and the fact that I had JUST bought the neoprene mats of the original player boards 😅Highly suggest checking out the preorder on the 28th if you are a fan of Wingspan though! Definitely made my gameplay experience much more enjoyable!
I have another stressful Board of Education meeting tonight to figure out what teaching will look like in the next few months. Luckily, we were able to play a relaxing game of Wingspan with the upcoming Oceania Expansion tonight to get my mind off it 😄 It was a close game with my husband beating me by only one point! I’m looking forward to sharing my review of the new expansion this week!
Loading Comments...
Comment
×
%d bloggers like this:
%d bloggers like this: