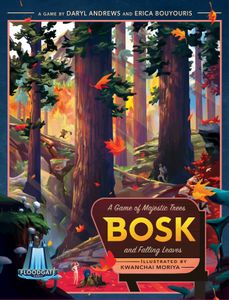 You are attempting to grow a thriving forest in a national park for nature lovers to enjoy. Plant your trees carefully to ensure their growth among an increasingly crowded forest. Be ready to ensure a beautiful hike throughout the seasons by having your trees stand out.

Bosk is an area control game that takes place over 4 seasons (rounds). Each of the rounds has a different mechanic, but all of the rounds rely on the first round to set a foundation for the rest of the game play.

In the first round, players will be placing their trees on intersection points of rows and columns. Players will want to keep in mind that they will score points in the next season based on how sum of their trees compared to the other players in each row and column. Once all players have placed all of their trees, all players will go into the next season to score those points. Scoring is based on the number of players in first place, second place, or tied for either placement as shown by the chart above.

Once the wind direction tracker reaches it’s last stop, players will take their turn and then continue to winter for scoring. Similar to summer scoring, winter scoring  is based on the number of players in first and second place. The chart pictured informs players of the number of points they will score. However, winter scoring is based on area control in each of the colored areas on the board. There are eight sections, so players will look to see who has the most leaves on each area, and who has the second most leaves.

The player with the most points at the end of the winter season is the winner.

Bosk has a great table presence. The game comes with a central board, score board, wind direction board, first player token and player pieces in four different colors. The player pieces include 3D punch board trees, large punch board leaves, a squirrel meeple, and differently shaped wooden leaf chits.

The components are very well-made. Each of the different colored trees also have a different shape associated with them. This is especially helpful because it helps players easily decipher the different trees, especially in low lighting. The organizer in the box is simple, but does keep the individual pieces organized. The organizer makes for quick set up and take down.

Despite being a beautiful game, Bosk can be a very cut-throat game! Tables that enjoy a lot of take that will really enjoy Bosk as it provides a high level of player interaction. While the simplicity of the rules would lend itself well to being a gateway level game, the game can be unforgiving to mistakes made in the first round.  Experienced players have a significant advantage over new players, as they are more likely to understand how tree placement can effect game play in later rounds.

That being said, one of my favorite things about Bosk is the depth of strategy in the game, despite the simple rule set.  There is no doubt that every turn taken has a large impact on being successful throughout the game. The ability to make well reasoned discussions is extremely important, and this game is likely to appeal to gamers who enjoy thinky elements in game play.

Beyond the depth of strategy in the game play, Bosk also looks great on the table. The theme shines through in this game. Players can really picture their forest losing the leaves during autumn. It is colorful and vibrant, and is sure to attract attention from anyone passing by.

While I really have enjoyed Bosk, I would not suggest it for everyone. It is a game with a lot of take that elements, and can be frustrating to new players. For those who enjoy  cooperative games or games with passive player interaction, Bosk might be frustrating. However, for gamers who enjoy high player interaction, easy  and depth of strategy I would highly suggest Bosk. I especially suggest Bosk for fans of Bunny Kingdom, Ethnos or similar area control games.

Will let me have my Christmas present early this year so that I could print minis for my students for our school D&D campaign. I got an Elegoo Mars 2 Pro resin 3D printer 😁 This was my first print, a Hero Forge character for our upcoming Witchlight Campaign! I was so surprised how easy it was to get started. It was something I didn’t realize I would want, but I’m so excited to have and be able to experiment with.
I was able to get my new miniature speed painted today and clean up my raw dice! My gnome was turned into a ceremorph in our campaign and I loved this mini from @mungos.marvelous.minis. The dice are the chaotic slush from @krakendice 🙂
Customary first day back with the kids selfie! Getting ready to mask up and welcome our kiddos back. Wish me luck!
It’s D&D Day! Started the day with an almost TPK…so it can only go up from here!
We spent last week traveling so I didn’t get a chance to share Will’s first Father’s Day gift. @eldritchartsus did a great job with the level of detail on the dice case and the inscription. The dice are Citrine Glass Dice (Atticus’ birthstone color) from @metallicdicegames. Will was ecstatic (except he thinks Atticus will be a Wizard not a Barbarian like his mom 😂).
We played a round of On Tour today. I’m debating picking up a few copies of this and the European Expansion to help next year in the classroom. I could see it being a great introduction to getting student familiar with Geography and where different states and countries are on the map!
Loading Comments...
%d bloggers like this:
%d bloggers like this: