Anvl is a website that allows customers to create custom miniatures that will then be 3-D printed in resin, steel, bronze, silver or gold. Those with 3D printers may also just purchase the files and print the miniatures themselves for a lesser cost. These miniatures can be used in a variety of RPG settings and other games. In the past, I have used Hero Forge which is built upon a similar premise. In this review I will compare the two for those who are wondering what the similarities and differences are between the two services. 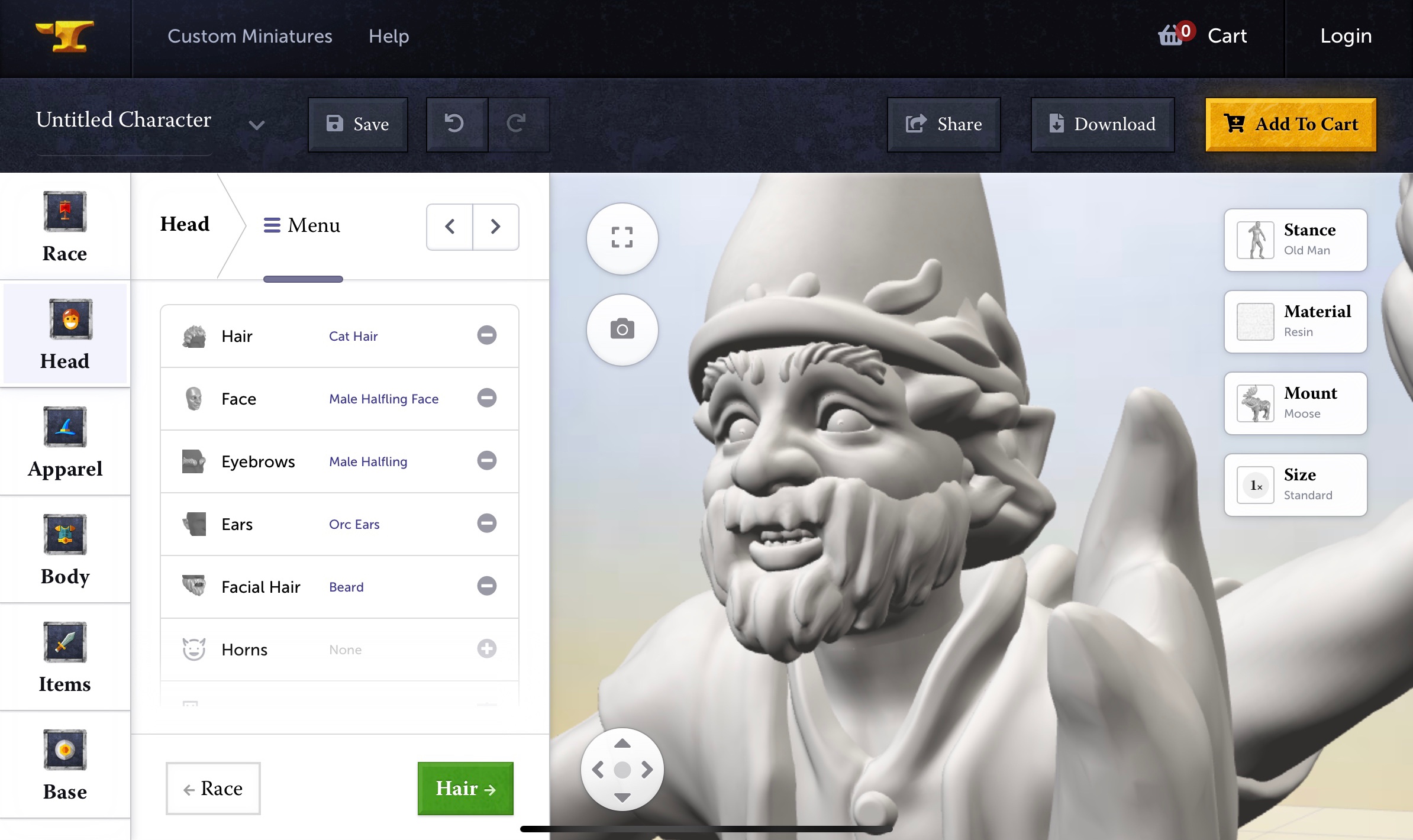 When building a miniature on Anvl, customers will click through a series of categories to develop a unique miniature. First, customers will decide upon a race for their miniature. There are over 15 different races to select, in male and female variants. Then players will customize the head type, features, facial expression and hair style. The process continues by allowing players to select the apparel that their miniature will be wearing. There are a variety of styles including modern, fantasy, steampunk and science fiction.

In the items menu, players will be able to decide what items the miniature will have included in their hands. This includes a variety of weapons, animals and everyday items that a player might need in a game. What is more interesting though is that players can select how their miniature is posed in this section. The items’ size and position can be adjusted, and the player can pose the model however they see fit. I suggest first selecting a stance in the top right corner, and then using this menu to tweak the position as needed.

The final menu on the left hand side is base. This determines the design and shape of the miniature’s base. There are a variety of indoor and outdoor bases, including both natural and more industrial bases. The designer can also add other items to the base and customize the size and layout of those as well. 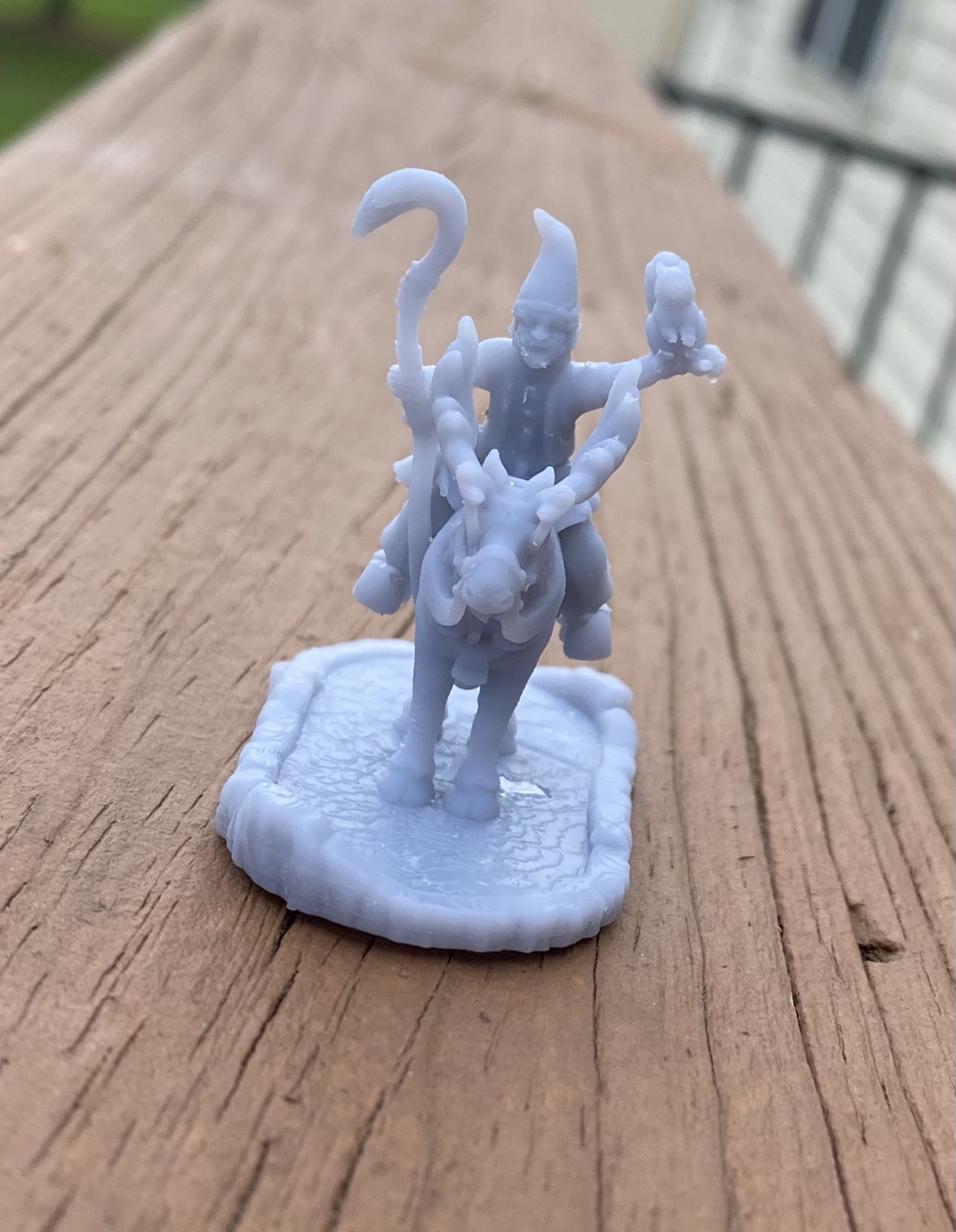 The first miniature that I created using Anvl was the mounted gnome pictured above that I will be using in an upcoming D&D campaign. I started out trying to build the miniature on my phone, but found that their mobile website was difficult to navigate so I switched to a computer to finish the piece.

I really enjoyed exploring the different options available on Anvl. There was good variety in the types of characters I could have made, and I was happy to find that it was easy for me to create the character I had in my mind without having to change too many aspects of my vision.  I loved the ability to customize the character down the small details of the positioning of the character and the side of their handheld items. This was especially helpful for my character who was on a mount. When selecting poses originally, some of the placements were awkward, and I was really happy to be able to adjust them easily.

I did find the website to be difficult to navigate at times, but this experience was vastly improved on a PC. I do wish that all of their menus were in the same place, because it would be easy to miss how to change the pose of the miniature or how to select a mount. I also wish the ability to adapt the stance and item size was it’s own menu, because it would have been easy to miss otherwise.

With those exceptions, I found the website easy to use. I was able to create my miniature in around 20 minutes. My miniature had a mount, so it was a little more expensive than the base cost, but I did not feel like it was excessive. I liked that I also had the option to download the file and print it myself. 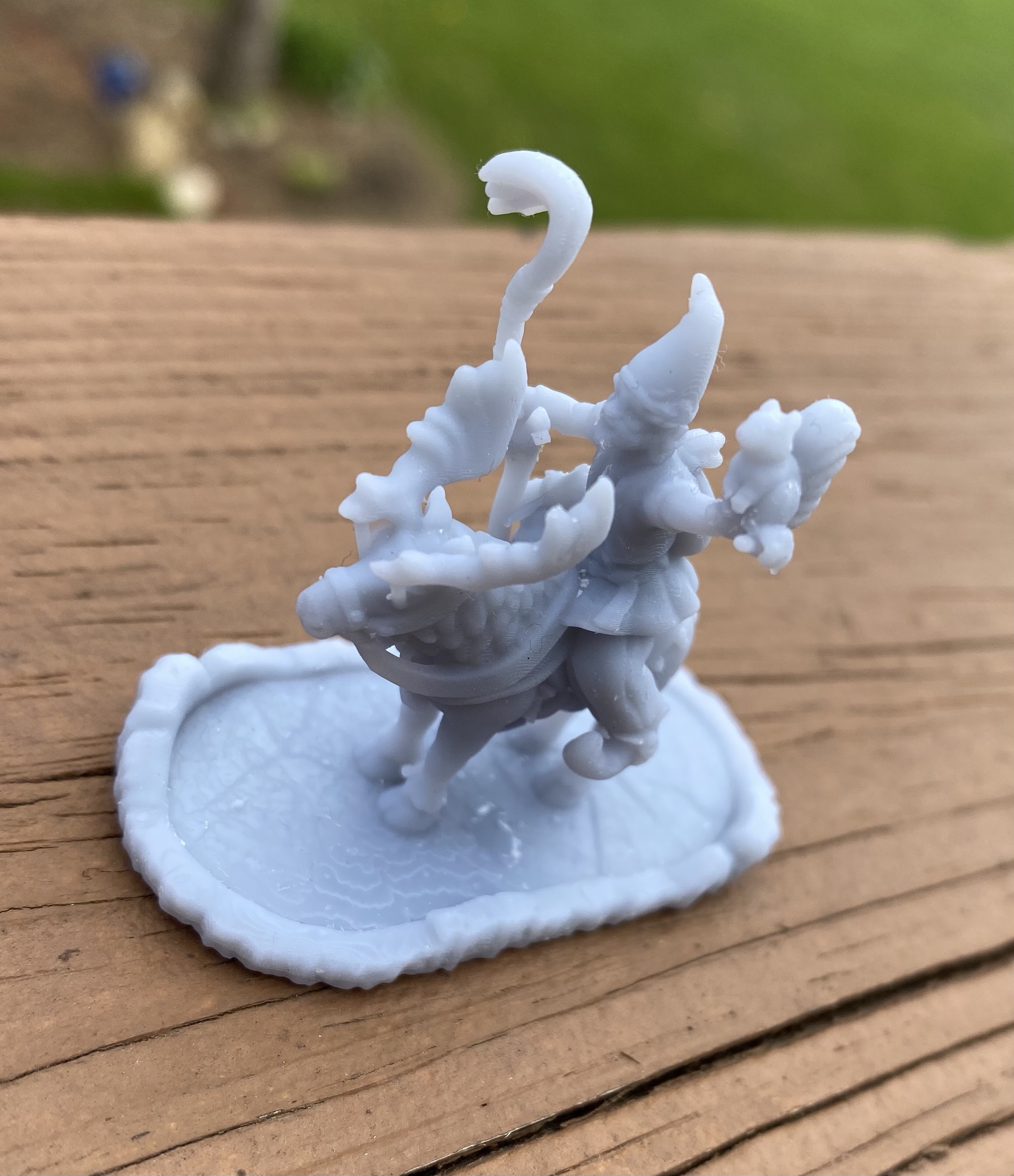 It took about a month from ordering to get to me, which was a little longer than I had anticipated. However it was worth the wait when I got the product. It was exactly as I had pictured it. The quality was good, and there were clear details on the miniature as well.

How does Anvl compare to Hero Forge?

This was a question that was on my mind as soon as I started to explore Anvl. I have used Hero Forge multiple times in the past to create miniatures for D&D and Zombicide. Overall I felt like the two companies were very similar, but Hero Forge had a leg up because they have been around longer and thus have had time to expand their catalogue.

Hero Forge had more variety in most of the categories (with the exception of mounts). The list of races, clothing types and items is extremely expansive, and gives players a lot to explore. This did not happen overnight for Hero Forge though, as they have been slowly adding content for years. This makes it difficult to compare it to Anvl which is a much newer company and as a result they have not had the same amount of time to build up this variety of items and apparel. I would be interested to see how they expand in the future to continue to compete. It has been interesting already watching the changes in both websites as a direct result of the other. For instance, Anvl was praised for including wheelchairs in their lists of mounts when they launched. Now, Hero Forge also includes wheelchair mounts as well. I think the competition between the two will be positive for anyone using either service as they will drive innovation in the available customizations.

I found that Hero Forge was easier to navigate as well. Each heading in Hero Forge is laid out the same and all of the menus are in the same area, creating a consistent process for each aspect of design. Throughout the menus there is the ability to sort by category making the process of creating a specific genre of  miniature easier. Anvl was not consistent on their layout, so there were times that I almost missed something I wanted to add to my miniature (such as a mount or items on the base). 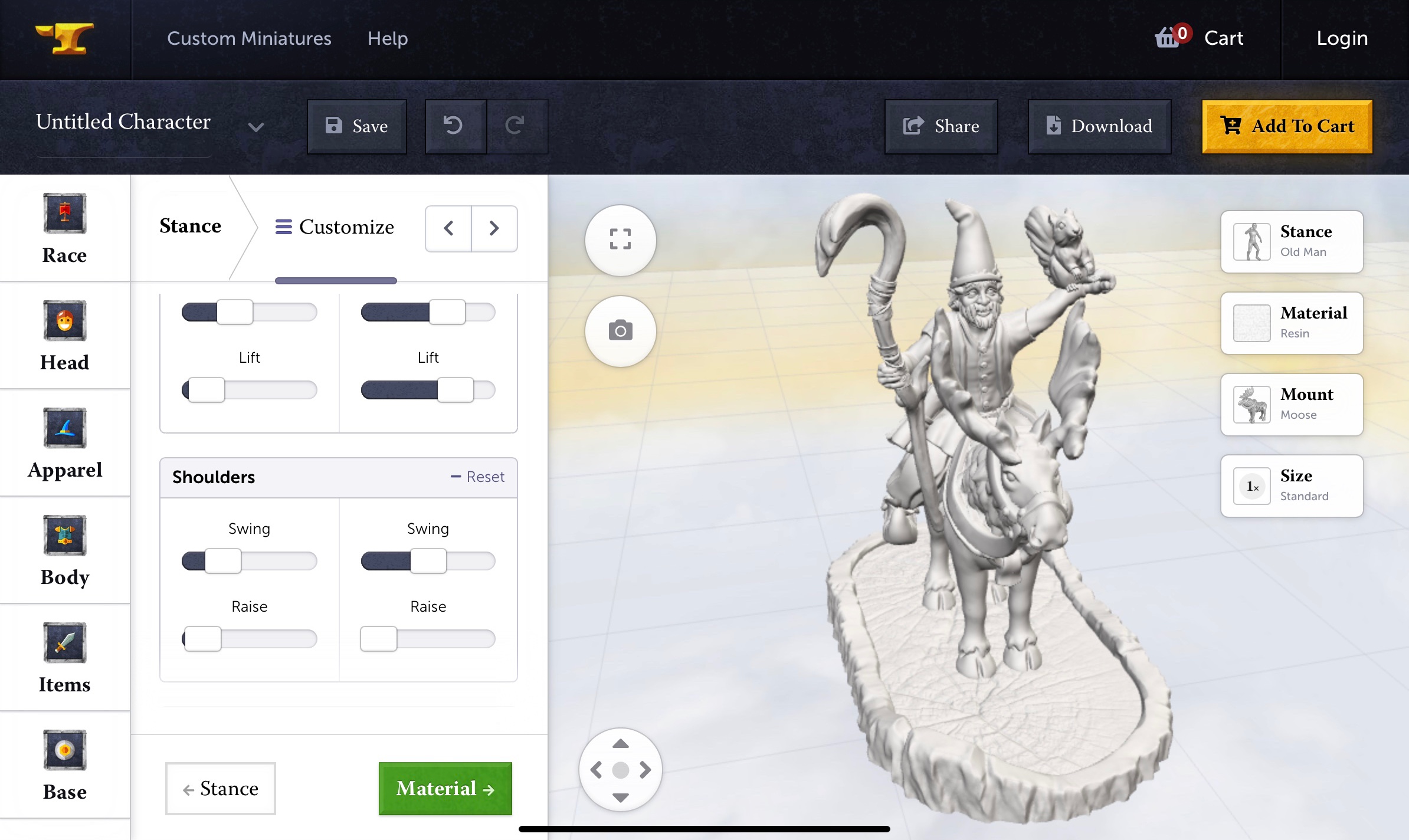 One thing I did really like about Anvl though was the ability to customize the stance of the miniature down to very minute details. The ability to decide the side and exact position of items on the miniature was something that I really appreciated. Hero Forge has also changed to provide more customization to the stances of their models, but this is an aspect that I believe Anvl has done with more depth.

Heroforge also gives the option to have their miniatures come printed in color for those who do not enjoy painting. The color is very basic, but is good for those looking for a quick way to increase table presence. Adding color to a miniature does come at a higher cost though. This is an option that is not offered by Anvl.

As far as the final product though, Anvl has a better material for the price (at least at the entry level), and their base cost resin is a much better quality than Hero Forge’s base plastic, both for durability and painting. Many of my Hero Forge pieces have had pieces break off with minimal use. This is a problem I have not run into with my Anvl miniatures. Additionally, I feel like they have better detail throughout and also hold paint better than Hero Forge.