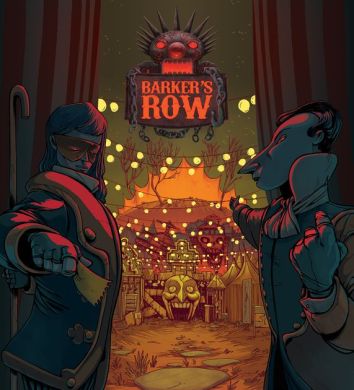 “Step right up! Step right up! Come and see the wonders we have to behold. We have something to see for everyone: Lobster boy, a Were-Walrus, an Invisible Man, and even the Grim Reaper himself. This is a once in a lifetime opportunity You won’t want to miss this!” You have taken on the role of a carnival barker. Your job is to fill the stands for the acts on your stage, before your opponents fill their stands. Only the barker with the best attractions can steal the show.

When a player begins to play Barker’s Row, they have a hand of three attraction cards, a stand in their color, and their tower marker on the space marked four on the Strongman’s Tower. In the middle of the players, there should be barker’s cards deck, with three cards laid face down. Additionally, there should be space below barker’s row for the midway. This is all the set up required for Barker’s row.

Starting with the player who had done the most recent astounding act, players take their turn in a clockwise manner. On a player’s turn they must first take one of the three facedown barker’s cards and move them to the midway. They must then determine if they can do one of the other two actions. The first of those actions is scoring an attraction. A player  may take this action if they see cards with enough value in the midway that match the the suit of their attraction. Horrors need pink cards, beasts need orange cards, freaks need green cards, and oddities need yellow cards. There are also rainbow wildcards to assist players in meeting the requirements of the cards. The value needed is determined by the player’s position on the Strongman’s Tower.

Once a player takes this action, they must follow a series of steps to complete the action. The first thing they must do is discard the barker’s cards they are using from the midway. Then they must move their marker up one level on the Strongman’s Tower. Then they may add 2 rubes to their grandstand. Finally they draw an additional attraction to replace they one they have just played.

The other action a player may complete is using an attraction card that they have scored. In order to do this, the player will take the card, indicate that it has been used (I like to move mind behind the grandstand) and then follow the text on the card to complete its ability. There is a lot of diversity in what the attraction cards do. Here are some examples, the attraction card may allow players to populate the midway, draw additional attraction cards from the deck, trade attraction cards with another player, move their position on the strongman’s tower down or bring a used attraction back to the stage. There are plenty of ways to combine and use these attractions to gain rubes and get an upperhand in the game.

Once a player has done all the actions they would like to do in their turn, play passes to the next player. This continues until someone fills their grandstand with rubes. As soon as that condition is met, the player wins the game.

Theme oozes out of the components included with Barker’s Row. It comes with four 3D grandstands in different colors for players, a 3D Strongman’s Tower, and a variety of wooden rubes in addition to the barker’s cards and the attraction cards mentioned earlier. The 3D components give the game a strong table presence and attracts a lot of attention, just as a barker may attract attention to a stage. One nice thing I was happy about is the rubes are varied, but you do not need to put stickers on them. I am not someone who enjoys putting stickers on wooden pieces because they never seem to go on right. One thing I wish was better executed is the sturdiness of the Strongman’s Tower, which is only held by a plastic clip. Overall though the game and the artwork is wonderfully executed. 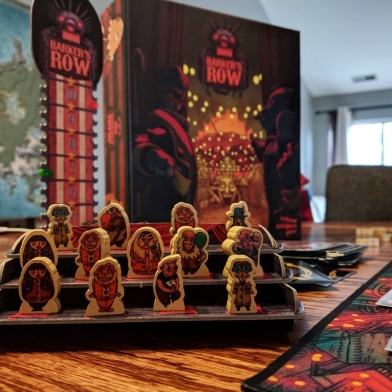 Barker’s Row is a quick game with solid gameplay. The simplicity of turns makes it easy to teach, and because it is quick to set-up and play it has made it to my table a lot since picking it up. Over those plays I have noticed some different things about the game. First, there is a lot of replayability in this game. I still have not seen all of the combinations of attraction cards that can be used. The variety in cards changes a player’s strategy each time they play. If a player gets lucky with a good combination of cards, the game can be over quite quickly. There is an element of luck to this game, not only based on the attraction cards drawn, but also the barker’s cards drafted into the midway. If a player has an entire hand of horror attractions, and no pink barker’s cards are drawn, they are at a huge disadvantage. Luckily, later in the game the attraction cards provide ways for players to discard and draw cards to make the likelihood of this happening less. Another concern I have is that once players markers are high on the Strongman’s Tower, there can frequently be 5-8 turns in which the only action any player can take is drawing cards into the midway. While turns are quick, this can become quite dull, especially at low player counts.

The way that this game really shines though, is in the theme. If players really get into the barker roll by not just playing the cards, but including the descriptions included on the cards the game becomes a lot of fun. I mean, what sounds better? “I play this pink attraction” or… “Come one, come all to see the terrifying ghost girl! She has been dying to meet you.” Don’t get me wrong, the game play is fun, but without the theme the mechanics may not be strong enough to keep it on my shelf long term. The components and theme really make this game from an average filler game into something special.

If the carnival theme is something that you are interested in, I highly suggest this game, it really stands out from anything currently available. The dark and creepy art mixed with the 3D components are something that will catch the eyes of anyone walking by. Plus, the provide strong enough game play that all gamers would likely enjoy it. If you do not care for the theme, or table presence is not something important to you, I might suggest passing on this one. While there a lot of positives, without the interest in the theme, the mechanics might not be enough to keep long-term interest. Some benefits are there is strong strategy decisions in combining cards, and players are offered a chance to catch up due to the increasing difficulty of the Strongman’s Tower, some people may also enjoy that  there is a luck mechanic based on the barker cards drawn. The mechanics are fun, but nothing earth-shattering.

Played a surprisingly amiable round and of Rurik today, with the exception of everybody wanting to tax all the time. We all absolutely love this game, and it has quickly become a regular at our table. We must have gotten all of our aggression out during Raccoon Tycoon 🤷🏼‍♀️ @piecekeeper_games #rurikdawnofkiev #rurik #piecekeepergames #boardgaming #boardgames #tabletopgamer #tabletopgames #boardgamesofinstagram #instagamer
Racoon Tycoon from @forbiddengms has some of my favorite game art. Which is probably a good thing, because it makes the auction wars a little more pleasant...things were getting heated at our house today 😂 Soon I need to pick up the expansion for this one 🙂 #racoontycoon #forbiddengames #boardgames #tabletopgames #tabletopgamer #boardgamer #gaming #familieswhoplaytogetherstaytogether #instagamer #boardgamesofinstagram
Pretty excited about this liquid center die from @grimstylesart. I won a contest to get a readymade die from them earlier this year. I love the movement and shine in the it! While this one is beautiful, you should really check out some of their custom dice. They are gorgeous. Due to this one being a readymade die, there are a few minor flaws on it, but the shine still comes through and it rolls pretty well. This die originally came inked black, but I did a reink to colorshift green so the contrast was a little less harsh. Who are your favorite dice creators on Instagram? #dice #liquidcenterdice #d20 #grimstyleart #dungeonsanddragons #dnd5e #polyhedraldice #tabletopgames #tabletoprpg
If you enjoy long meanders through the forest, then Bosk from @floodgategames might be a great game for you. My full review of it is now live on The Meeple Street, but here is a quick overview. It is an area control game where there are four rounds. Each round has a different gameplay or scoring mechanic. It has a lot of player interaction, and there are a lot of heavy take that mechanics. The rules are easy to teach, but there is a surprising amount of depth to the strategy, especially the first round. If you mess up early in the game, it can be difficult to recover. As far as components, it's a beautiful game with easy set up and take down. It's a game that I can say the theme shines through brightly! I suggest it for those who enjoy Bunny Kingdom or Photosynthesis. #floodgategames #boardgamegeek #boardgaming #tabletopgamer #tabletopgames #boardgames #bosk #themeeplestreet #boardgamesofinstagram #instagamer
No work today, so I had time to finish our kraken for our campaign 🙂 This was a quick paint job. It took around two hours to do, and I'm pretty happy with the results. I can't wait to see him on the table. #nolzursmarvelousminiatures #wizkids @wizkidsgames #tabletopgames #tabletopgamer #paintedminiatures #miniaturepainting #dnd #dungeonsanddragons #dnd5e
Things are getting heated as we play Kill Merlin from @schumanfamilygames. Spells are flying, and mom is holding people's wizard hats hostage. #killmerlin #schumanfamilygames #boardgamegeek #boardgaming #tabletopgamer #tabletopgames #themeeplestreet #kickstarter #boardgames