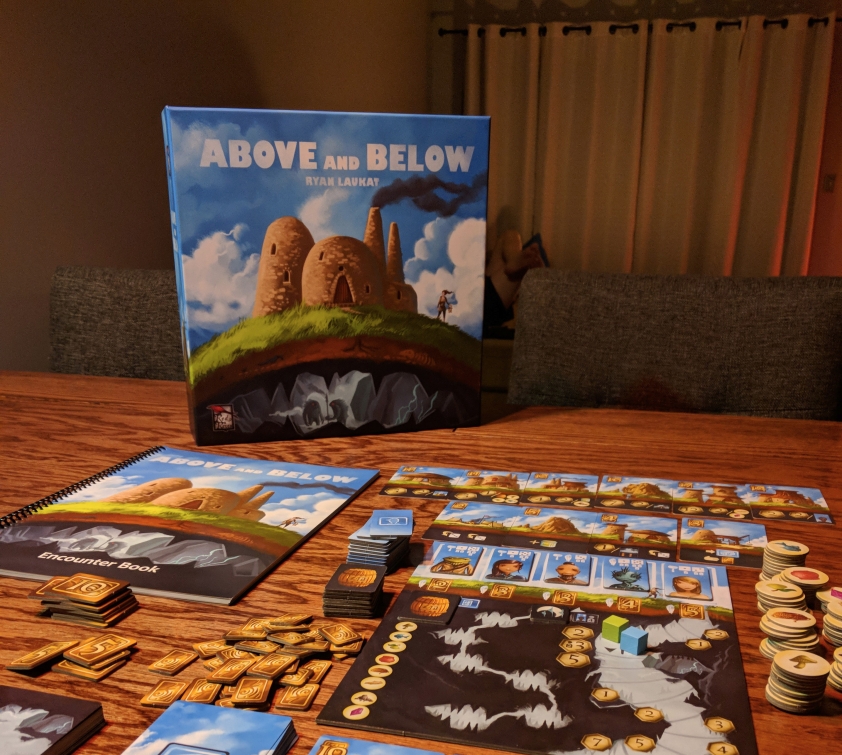 Game:  Above and Below

You have fled a vicious barbarian attack. After an exhausting trek across unforgiving landscapes you have finally found the perfect place for a new settlement. This new land has it all, treasure, resources, and land galore. Now as you place your roots down, you must expand into your new land. This means sending explorers on expeditions, and putting roots down both above the ground and below it. It won’t be easy though, there will be a great deal of adventure and stories to be told. Hopefully this time you will be able to build stronger to chase away the impending barbarian attack.

During set up, each player will take their own player board in a color of their choosing. After this players will select three different adventurers. They will place their villages on

Lets take a closer look at the various actions players can do with their villagers:

Harvest– Take one of the produced goods from the buildings and put it into the advancement track section of the player  board. These will score money at the end of the game. Alternatively, players can place resources up for sale for other players to purchase.

Build– If a player has a villager with the hammer icon in the top left of the tile, that player can take the build action. Players must pay the cost of the building and then put it into play next to their player board. Buildings can provide a variety of benefits, such as resources additional beds, or even additional points at the end of the game. If players want to build an outpost they must first have a cave card from a successful expedition.

Labor– Players may exhaust any of their workers to gain a coin. The first player to take this action will also take the cider token.

Explore-In order to explore, a player must have at least two available workers. To do this action, the player must draw a cave card. They will then roll the dice, and open the encounter book to the corresponding event. The player to your left will then help you to complete the encounter.

Encounters act as a choose your own story adventure. You will have choices to make, which will have requirements to be successful. A player will need to declare their decision, and then roll one dice per villagers in the encounter. They will then check their dice to the corresponding dice on the villager’s tile. That corresponding die will have a number of lanterns underneath it. The player will add all of their villager’s lanterns together.  They will then inform the assisting player of how many lanterns they acquired. That player will inform you whether you passed or failed the encounter. If you passed, they will share the resources you received and you will keep the cave card.

What if you fail? Well first, if you are close to be successful you may choose to injure a villager. For each injured villager you receive another lantern, potentially making it so that you can pass the challenge. If you choose not to do this, then you would gain no resources and you would discard the cave card.

After seven rounds the game will end. End game scoring will include gaining one point per building built, money from the advancement track, reputation points, and finally bonus points from buildings built. The player with the most points will win the game.

The artwork in Above and Below is compelling. The whimsical look of the villagers and

buildings is what drew me into the game. It has a vast array of villagers as well. The diversity in age, race, and species of villages is interesting to see and refreshing. The components themselves are also well put together. All of the tiles are easy to read, with simple iconography. The iconography is also consistent throughout the game, making it easy for new players to understand.

Above and Below creates a narrative that is entrancing and causes thought provoking decisions. The adventures that players will encounter throughout the game are well written, with interesting reactions to decisions. Sometimes these encounters are so interesting, that they can completely pull players into only wanting to add further to their narrative. This can actually hurt players in the game, because they are then not completing other integral aspects of game play. The designer did a brilliant job of not just making this game a story-telling game. Players also need to  balance the resources provided to them, and develop a strategy that incorporates the various aspects of game play…not just the story telling.

There is so much to complete in the game that it frequently feels like the seven rounds given in the game play is simply not enough. The end of the seventh round feels like a halt of natural game play, rather than a smooth finishing point. I often house rule this so that the game ends after 10-12 rounds.

Overall the game is beautiful. The variety in encounters allows players to have a different experience each and every game. It has depth of strategy that will appeal to seasoned gamers, but simplicity of mechanics that can be easily understood by anyone. I would honestly suggest this game to anyone who enjoys the feeling of adventure or who enjoys games that include careful management of resources.

One thought on “Above and Below Review”

I was able to get my new miniature speed painted today and clean up my raw dice! My gnome was turned into a ceremorph in our campaign and I loved this mini from @mungos.marvelous.minis. The dice are the chaotic slush from @krakendice 🙂
Customary first day back with the kids selfie! Getting ready to mask up and welcome our kiddos back. Wish me luck!
It’s D&D Day! Started the day with an almost TPK…so it can only go up from here!
We spent last week traveling so I didn’t get a chance to share Will’s first Father’s Day gift. @eldritchartsus did a great job with the level of detail on the dice case and the inscription. The dice are Citrine Glass Dice (Atticus’ birthstone color) from @metallicdicegames. Will was ecstatic (except he thinks Atticus will be a Wizard not a Barbarian like his mom 😂).
We played a round of On Tour today. I’m debating picking up a few copies of this and the European Expansion to help next year in the classroom. I could see it being a great introduction to getting student familiar with Geography and where different states and countries are on the map!
I’m really enjoying Mysterium Park! We brought it along on our trip because it is shorter and easier to transport than it’s predecessor. This is my favorite clue card! I was not able to give it to a player, but it did make me smile!
Loading Comments...
%d bloggers like this:
%d bloggers like this: