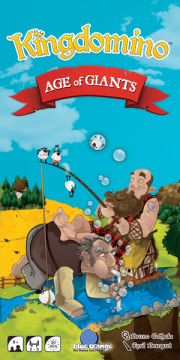 You are a powerful lord seeking to expand your kingdom into new lands. You will grow as a kingdom as you explore new territories to seek the best combination of mountains, forests, oceans and plains. However, as you grow your kingdom you attract the attention of unwieldy giants who hurt the growth and production of your kingdom. Fight to scare these giants off the board before the kingdom is settled.

This review only covers the Age of Giants expansion for Kingdomino. Here is my review of the Kingdomino base game.

Game play for Kindgomino Age of Giants is very similar to the base game of Kingdomino or Queendomino.  There are a few different steps to be taken during set up though. First players will select whether they will use the Kingdomino or Queendomino base game. Then they will shuffle the lettered tiles and numbered tiles from the expansion into the the base game. Once tiles are shuffled they will be placed face down into the dispenser. Then draw five tiles from the dispenser to create the first row, discard tiles in the middle until there are only as many tiles in the middle as there are players. Then players will shuffle the additional scoring tiles including in the expansion and pick two. The rest will go back into the box.

Play continues as it normally would for Kingdomino or Queendomino with players selecting tiles in order. The only two things that change during gameplay is when players select a lettered tile with a giant on it, or a tile numbered 49-54 with giant footprints on it. When a player selects a card with a giant on it, they must cover up a crown with a giant if there is a crown available. If the players have no crowns then a giant is not drawn and the tile acts as a normal tile. When a crown is covered it cannot be scored. When a player draws a tile with giant footprints they hand one of their giants to another player who must use it to cover one of their crowns up.

Once all tiles are either in play or have been discarded, players begin final scoring. There is a score pad included. Play is scored normally, with the only exception being that players will add in the two special scoring tiles. Tiles do a variety of things like give points for certain land types surrounding the castle, being in the corners of boards, or not having crowns.

Age of Giants adds a variety of things to the base game. First, it adds a fifth player with the castle, two meeples and it’s board. Second it adds three new types of tiles: scoring, giants, and giant foot prints. There are also six giant meeples.  Finally it adds a tile dispenser with a magnetic opening.

All of the elements are quality, but I was especially impressed with the dispenser. It is very high quality, the tiles are easily removed from it, and it looks great on the table. It makes keeping the game organized during play significantly easier.

Age of Giants adds exactly what I would expect from a Kingdomino expansion.  As a person who generally play with five players, the addition of a fifth player is greatly appreciated. However the real addition is the direct player interaction mechanic with the giants. Now during play players are forced to check what other players are doing and will need to be aware of who has the most crowns for scoring. It adds an extra element to the game that was missing in the base game. That being said, it does have the possibility to become a take that scenario, especially if players gang up on a single player. Giants do have a huge impact on scoring, so if one player is getting handed three or four giants it could quickly become a frustration.

With the addition of giants I would say that the only negative is that it takes a game that works fairly well with two, and makes it so that it only plays well at higher player counts. In order for the giant tiles to come strategically into play, there should be at least three players, but it would play best at four or five players. This is because in a two player game players will just be handing giants back and fourth, there is no strategy behind it. However in higher player counts players will have to be engaged with other players boards. While the expansion is still functional at two players, it really shines with more.

Another nice thing though is that the expansion does add replayability to the simple base game. The scoring tiles give a bit of variability and new objectives to each round. This helps keep players engaged and paying attention to different things. Each scoring tile will have players building their kingdom differently and striving for different goals.

If you enjoy Kingdomino and play with more than two players, I would say that this expansion is a must have. The player interaction adds a brilliant element to the game play and the scoring tiles add new objectives to keep players trying new things each round.

One thought on “Review of Kingdomino Age of Giants”