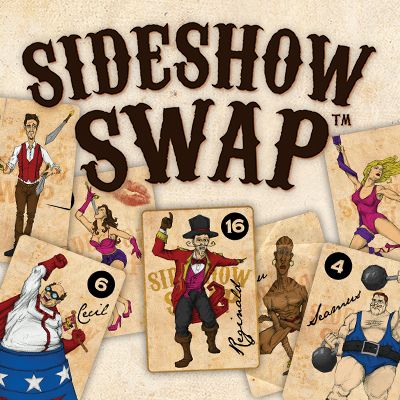 Step right up! Discover the newest talent! Be weary, only one can be the best! In this quick hand management game, players will be competing against other players to draw the best side show attractions into their show. Time is limited, and other players want only the best shows. Who will come out on top?

In Sideshow Swap, the goal of the players is to end with the highest performer card in their hand. Set up is very simple. First a player will shuffle the performer cards, then hand one out to each player. After that then they will place five face down in the middle of the table. Place the remaining performers in the box. Then they will set up the bank. Place five Bux for each player in the center of the table, then from that pile give each player two Bux. Finally shuffle the ticket deck and give each player three tickets. If any player gets  a red Now Playing card, draw a new card then return the Now Playing card to the deck and shuffle. Then the game is ready to begin.

Players have three options for what they can do on their turn, and they must be done in the following order. First a player should take a Bux from the bank. Then a player may draw a new ticket from the ticket deck. If the player draws a Now Playing card they must immediately play it, follow the action listed and end their turn. Finally a player must either swap their performer in their hand for one in the center row or play a ticket from their hand to the table.

Tickets can do a variety of things such as having players switching performers or tickets, gaining Bux, or shuffling cards in the center. These are all ways to cause a little bit of chaos, and potentially get a higher performer in your hand. All tickets have an associated cost in the right hand side. Players must pay the associated cost before playing the card.

Turns continue through those three steps until one of two end conditions is met. First would be that a player runs out of tickets in their hand. Second is that the ticket draw deck has run out of cards. The game then ends and the player with the highest performer wins the game.

I received a preview copy of Sideshow Swap and all components are subject to change.

The card art is reminiscent of an old sideshow poster and fits the theme wonderfully. The information on the cards is easy to follow with the card value being clearly laid out, ticket costs being easy to decipher and ticket actions easy to follow.  I do wish that the title of the game was not on the front of the cards, but rather just on the back. The pictures could stand on their own and having the title on the front is a little convoluted.

Additionally, currently the Bux are 3-D printed, and while I do not expect that this will be the final product, they do lack detail on the other side of the coin.  I imagine this will change when going into final production.

That being said I do like that the card types are easily distinguishable by size. The ticket and performer cards can easily be told apart. The game also comes with player aids, which is something I like in all games, even when the steps in a turn are fairly simple.

Sideshow Swap will have a feeling of familiarity for gamers who have played Love Letter. However it provides key differences that make it stand on it’s own in a positive way. Sideshow Swap is unique in that it provides an extra layer of strategy, and it does so in a way that is easily taught but harder to master. Players will have to be aware of multiple elements in game play to really be successful such as what cards are in the middle, how many tickets each player has and who seems to be trying to hold onto their cards. The first few games can be a real learning experience for players.

One of the most positive aspects of Sideshow Swap though is its flexibility. This is a game that can be used in a multitude of settings, because it can be played with as few as two players or as many as eight. It comes in a small box that could easily be brought into a bar or other public location. Beyond that it is family friendly and could easily be taught to children. As an educator I could see myself using this game in the classroom for game days.

My biggest complaint with the game would be the time it takes to play it. When playing a small card game such as this, I would expect game play would take 20 minutes or at most 30 minutes to play. However this game can take as long as 45 minutes to play from start to finish. Though some games will be as short as 10-15 minutes. It makes it difficult to use this game as a filler while waiting for food at a restaurant or a quick brain break in a classroom because there is such a range in time it takes to play. That being said, unlike similar games such as Love Letter, there is no player elimination in Sideshow Swap. All players will still in the game the entire round, meaning no one is sitting out waiting for others to finish.

Even with the time it took to play though, all of our players were engaged in game play. It is a game that encourages players to be attentive not only on their turns but other’s turns as well. Players can plan and scheme as far ahead into the future as they would like, but must be prepared for the chaos of the other players turns and be able to adapt their plan to fit the changing game play.

I would suggest Sideshow Swap to players who enjoy card games like Love Letter, Fluxx or No Thanks. This game will likely be played more for us than Love Letter because it has such a similar feel, but adds so much strategy to game play while taking away things like player elimination and low player count. Additionally if you have been enjoying the recent influx of Carnival themed games such as Barker’s Row, Meeple Circus or Circus Puppy this may be one to take a closer look at. It feels very thematic throughout so it is a good choice if that is a theme you have been enjoying.  It will be going to Kickstarter in September, so keep an eye out for it!

One thought on “Review of Sideshow Swap”