You have been entrusted to create a powerful kingdom. Your job is to divide your kingdom amongst your loyal dignitaries to create a strong cohesive kingdom. Gather the help of wizard’s magic to make sure that everything goes according to plan.

Kingdomino Duel takes elements from its popular predecessor Kingdomino but is created with the aim of having a more cohesive streamlined two player experience. Unlike in the original game, in Kingdomino Duel players will be building the dominos out of dice which are rolled at the beginning of each turn.

Each turn, the first player will roll the dice. They will then select one of the dice available from the pool. The second player will then choose two of the remaining dice, and give the first player the last die available. Players will then combine their two dice to create a domino which will be placed in their kingdom. Players will draw the symbols shown on their player mat to demonstrate where the domino has been placed. The first dominoes placed must be connected to the castle. Every domino placed after that must be touching at least one matching symbol or touching the castle. 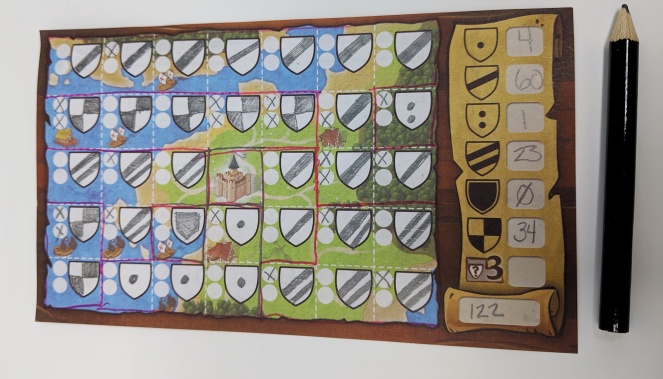 Play continues like this until the game ends. The game ends when a player fills in their last space on their player board or when either player cannot play a domino. Players will then group areas with the same coat of arms, scoring each group by multiplying the number of shields by the number of checked bubbles for that section. Each coat of arms may have multiple groups. When that happens, players will add each of their groups together to receive a final score for that coat of arms. Players may also score an additional bonus for having multiple groups of a single coat of arms if they reach the bonus indicated on the spell book. The player with the most points at the end wins.

Kingdomino comes with a few simple components. The small box comes with a pad of player sheets, four dice and two pencils. The symbols on the dice are easy to draw, and the player mat is laid out in a way that is easy to follow. I especially like that the spell book is included on the back of the player mats, so that there are not two separate pads of paper to keep track of.

The sense of familiarity in Kingdomino Duel is just enough to be enticing. I loved that this game echoes some themes of Kingdomino but introduces new mechanics that make the game play more seamlessly than its predecessor at two players.

This game provides enough strategy to hold the interest of experienced players, but it still could be played with families. Players need to be aware of how their dominoes will be spaced throughout the game, and planning which dice to draft adds variety and luck into the game. While I wouldn’t suggest Kingdomino Duel for someone looking for a heavy game, it could be a strong choice for someone who is looking for something easy to travel with or play with a spouse in downtime.

The only complaints I have regarding Kingdomino Duel is that some symbols can be very similar. While I understand the need to keep the symbols simple, I wish that there would be more variety so it would be more difficult to confuse them during scoring. Additionally, scoring can be very busy, especially when adding multiple groups of the same coat of arms. Younger players may need assistance with scoring.

Overall though, I would suggest Kingdomino Duel to those who enjoy Kingdomino. There are a lot of similar themes throughout the game, but it is still different enough to own both. For those who have never played Kingdomino, but enjoy tile placement or roll and writes, Kingdomino Duel would be a good fit. While there are technically no tiles to place in the game, it still has a similar feel overall. It is a quick, fun little roll and write that provides a good two player experience.

I could also see implementing Kingdomino Duel in the classroom. If I were to use Kingdomino, it would be in an upper elementary school or early middle school math class that uses stations. The rules are very simple and could be taught to children to play independently. Students who are struggling with multiplication facts would benefit from the scoring method in the game. This also helps students develop the skill “multiply within 100” if you are in a state that implements common core standards.

When the students go to score their player board, have them write out each area as a multiplication fact and then solve. Students will be practicing their multiplication facts, and could implement other methods taught to find the correct answer such as grouping or counters. They will also get some practice with addition when they total their scores. It is a fun way to involve multiplication, and also remind students that it is a valuable skill outside of the classroom.