***This is a review of the first expansion for Tapestry, if you are interested in a full Tapestry review you can find one here***

Tapestry: Plans and Ploys is marketed as a more stuff expansion for Tapestry. It adds 10 Civilization Mats, 15 Tapestry Cards, 4 Space Tiles, 7 Landmark Miniatures and 5 Landmark Cards to the base game. Additionally, it includes features to improve the basic gameplay from the base game, such as a bag to hold Territory Tiles, Landmark Tiles to go on the Landmark spaces on each track, the Civilization Mat adjustments to the original Tapestry Civilizations in the Rulebook and a Space Tile to replace a misprint in some copies of the base game. 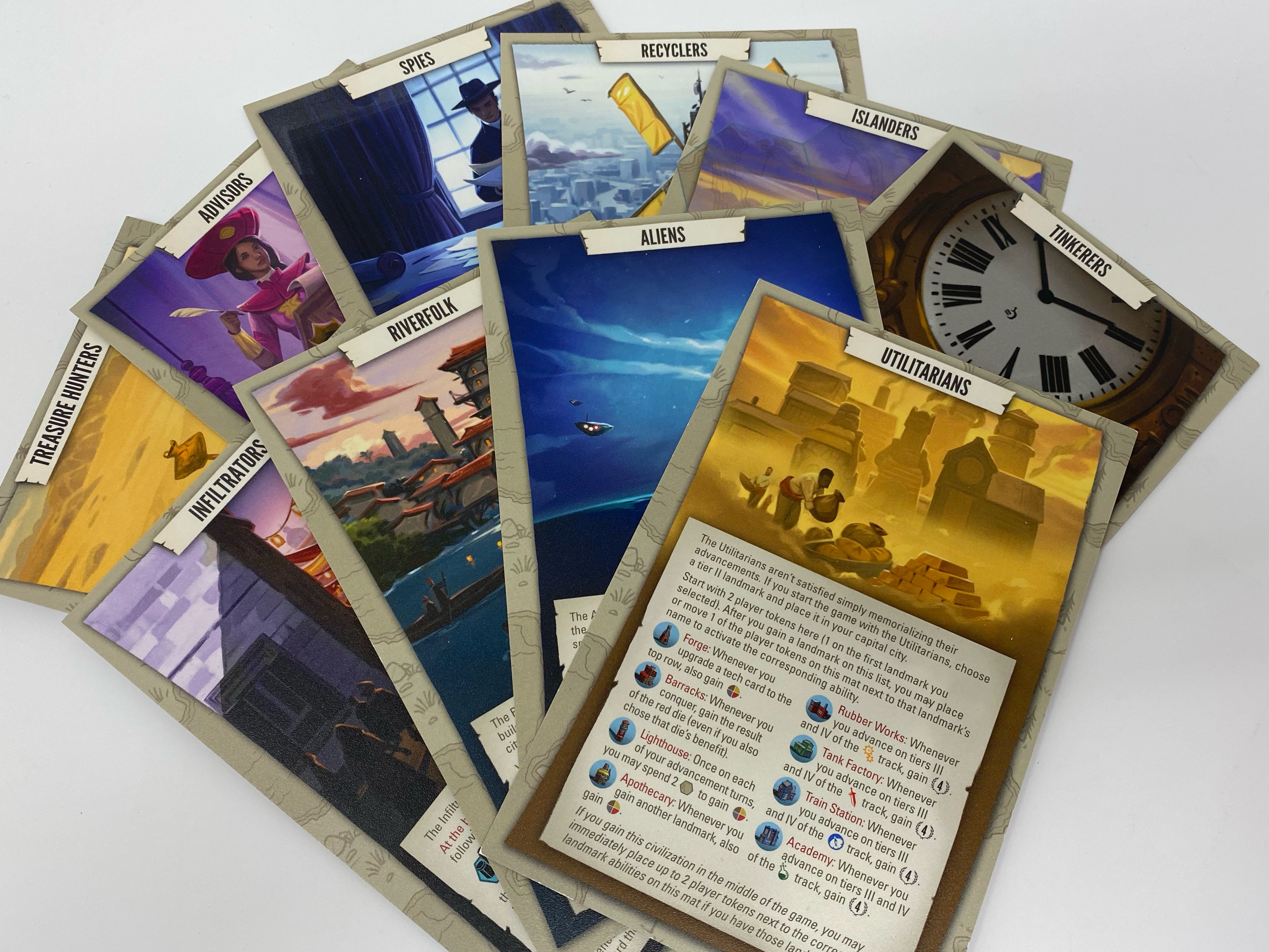 The biggest impact that the expansion has is the introduction of the 10 new Civilization Mats. These mats each play very differently than those included in the base game, and provide a vast amount of replayability, as they can be played separately or mixed in with the base game civilizations. A major concern for the base game was the lack of balance between the different civilizations. While I played the game several times to complete this review, due to the number of additional civilization mats, and the combinations that can be created with the base game, I can’t say whether the expansion will have the same balance issues. However, I imagine Stonemaier Games will continue to collect data and ensure the expansion provides a balanced experience. Some of the civilizations did feel stronger than others, but that may have been because players were not understanding the unique strategy of some of the new civilizations, I would have to play the expand several more times to give an in-depth review on the balance of the Civilizations.

I will say that the Civilization Mats do provide more focus on an individual strategy, rather than just giving players something at the beginning of each era. For example, the Utilitarians want to gain as many landmarks are possible, while the Riverfolk have more flexibility in their capital city. Each Civilization Mat may encourage players to try a new strategy, making players look at Tapestry in a new light each time they play. Some of the Civilization Mats even add player interaction, which I really liked as it encouraged those playing the Spy to pay more attention to the players around them. All in all, I can’t see myself playing without the new Civilization Mats because they do add a great deal of variety to the base game.

The biggest change mechanically in Plans and Ploys is the addition of the Landmark Cards. Landmark Cards are cards that give each player an individual achievement for the game. If players meet the goal that is provided on the card, they gain a specific landmark that can be added to their capital city. This was probably my favorite addition in the expansion because it came into play each game, unlike some of the Tapestry Cards and Space Tiles. It was also a good way to help guide a player’s strategy in new ways, and encouraged playing the game in a variety of ways. I also liked that it did not harm players who chose to ignore the goal, and focus on other strategies. However, for players who do not strongly focus on their capital city, or who do not reach their goal until the end of the game, the Landmark Cards can have a limited effect on gameplay. Despite it being a small mechanical change, I did enjoy this addition to the expansion.

Other elements of the expansion do not always appear during game play, but can be very useful when they do. For instance, the new Space Tiles focus on either giving the player a new landmark, or giving the player points for advancing on a specific track. These two things may or may not be useful, depending on when the player has gotten the Space Tile. We found that when a player got the tile that gave the player points on a track, right before they were able to reach AI Singularity, they were able to gain a significant number of points. In other games, when players were already towards the end of their respective tracks, these tiles had a limited impact on gameplay. The same could be said for gaining a landmark in a very crowded capital city. Regardless, the variety added was a benefit for the space tiles, and provided some interesting new interactions with the game.

Another element that does not always appear during the game is the new type of Tapestry Card. These cards interact in the same way that Trap Cards do, but they create new outcomes for when another player conquers your outpost. Some of the cards cancel their attack, and give you an addition benefit like stealing one of the opponents Tapestry Cards, Topple their Outpost, or gaining points. Others allow you to move your outpost to an adjacent space or rolling the conquer dice and taking both benefits. All of these cards additionally have an ability that can be played normally as a Tapestry Card at the beginning of a new era. While these cards rarely come into play at our table, they do add a tension to combat and some interesting player interaction.

Some small details that were nice was the addition of the Territory Tile bag, which helped keep the table organized, and the Landmark Tiles on the Trackers, which allowed players to easily see what Landmarks were still available. While these details were small, and only added to the gameplay in a limited capacity, I was surprised how much I enjoyed the addition. Both elements provided a more positive player experience by making an interaction with the game easier. 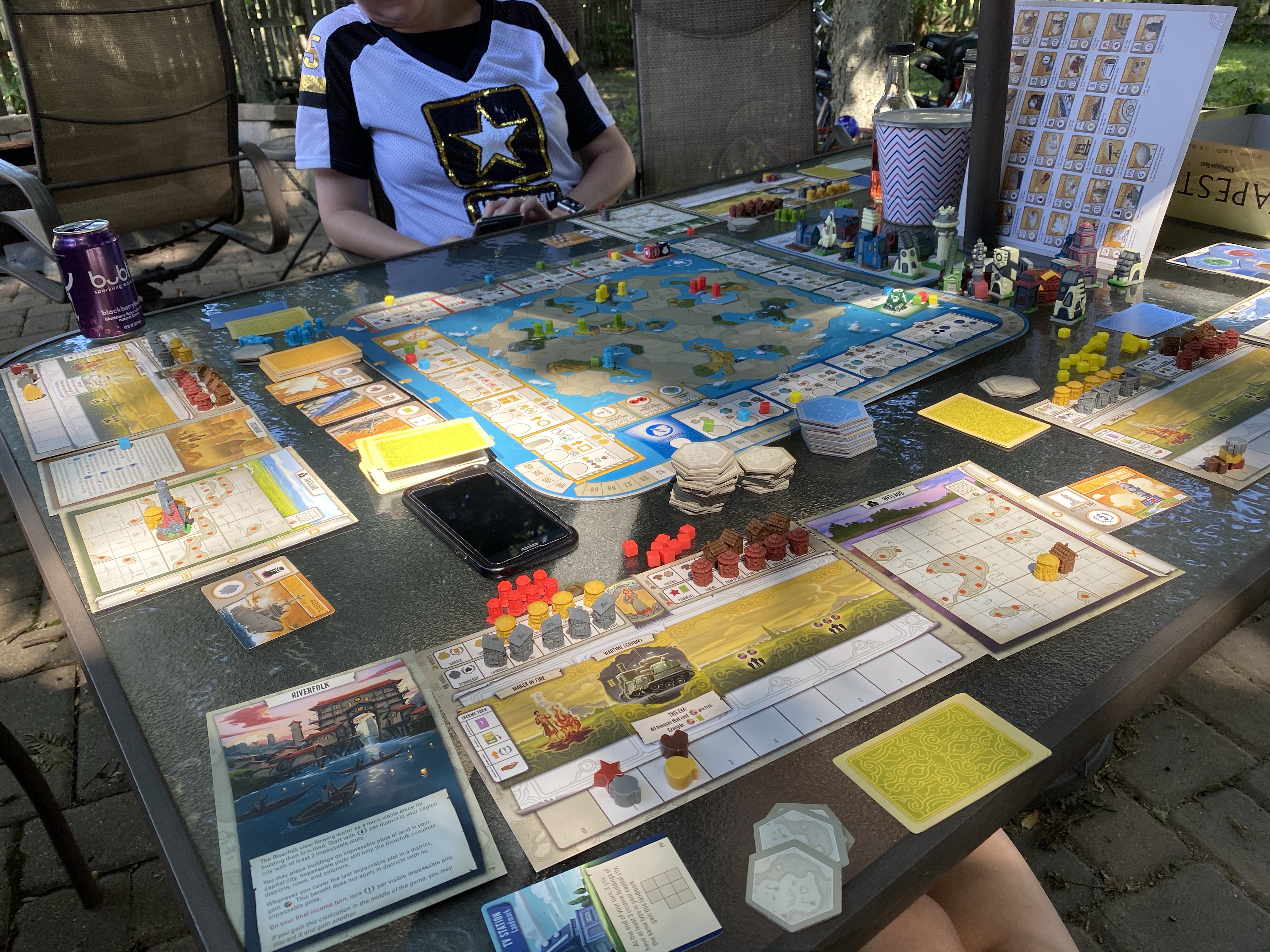 Overall, Tapestry: Plans and Ploys is a more stuff expansion that adds a few small mechanics to the base game. If you enjoy Tapestry, you will likely want to pick up this expansion. I can’t see myself playing without the expansion because of the simplicity of the new rules mixed with the added variety and player interaction. This is somewhat unfortunate because the expansion does not fit in the base game box, meaning I will always need to bring two boxes to play Tapestry, but it will be worth it. If you do not enjoy Tapestry as it is, this expansion is not going to change your mind on the game. It does not provide enough new content to provide an experience that will cause players to develop a new opinion on the base game. I would not say that Plans and Ploys is a necessity for Tapestry, but it does breathe new life into the game while providing new strategy options and engagement to the base game.

Atticus got his first d20 today from @wanderingdragongameshoppe. He wanted to participate in D&D Saturdays too. Now to continue my work on convincing him he needs to play a barbarian as he gets older.
I played my best game of Tiny Towns over the weekend! It was the only time I have ever won (and honestly the only time I have not come in last place). What have you been playing lately?
This year was a tough year as an educator. We spent so much time trying to adapt to new systems and support our students through new challenges. One of the biggest challenges was bringing fun and a sense of community into the e-learning and hybrid classroom. I used many games to help me along the way this year, and today my blog focuses on how I used games to help my students learn while having fun despite the challenges of this year. I will list the games here, but if you want to know how I used them (online and hybrid learning) check out my blog post at The Meeple Street. You can find the link in my bio. The games were:
I got Mysterium Park for my birthday. I love Mysterium, so I enjoyed the new setting and slight variation on the rules. It will definitely make its way into our travel bag for this summer since it has a significantly smaller table footprint.
I’m excited to say that my review of Red Rising from @jameystegmaier is up on The Meeple Street. When I heard the game had inspiration from Fantasy Realms (my favorite filler game), I knew I would be hooked. I read the book series while in the hospital, and it only made me more excited for the release of this game. It shouldn’t come as a surprise that I enjoyed the game overall. However, if you want to read my full list of pros and cons, and figure out if it is a game for you, I highly suggest taking a look at my blog! You can find the link in my bio.
Prepping for my lesson on grit and perseverance today! I’m so grateful that @spacecowboysus makes a reusable, affordable escape room type game. Every year my students love playing it, and it allows me to bring a game into the classroom for the full class to play without breaking the bank.
Loading Comments...
Comment
×
%d bloggers like this:
%d bloggers like this: