Viticulture plays over a series of different seasons. Players will have the opportunity to interact with a variety of actions throughout the seasons. Starting in Spring, each player will determine where their wake up position will be. The wake up position not only determines turn order, but also provides an additional benefit to that player for the round. Incentives range from additional cards, workers, victory points and money. Once turn order is determined, players will continue in the order that their rooster appears on the wake up track, not in clockwise order.

in summer. There are various actions to complete such as gaining money, planting fields, gaining vine cards, playing summer visitor cards,  selling or purchasing wine fields or building structures. Summer sets the field for the winter actions. When players plant fields they take their vine cards and place them in one of the 3 fields on the player board. Similarly, each structure has an assigned space on the player board which explains their benefit to the player. Once each player has taken the actions they would like in summer, they pass their turn. After all players have passed turns, play advances to the fall stage. During this phase players may either select a winter or summer visitor card, which will provide a variety of benefits to players but can only be played during the season that correlates with the color of card. Once all players have made their selection, play advances to the winter phase.

During winter, players are once again given a variety of actions they can choose to take. Players will only be able to use workers they have not already allocated to a space during summer in winter. Actions in winter include drawing wine cards, play winter visitor cards, harvest their field, train workers, create wine or fulfill wine orders. Fulfilling wine orders is the major way to gain victory points in this game. Wine orders will require a certain type of wine to be made at a certain quality as listed on the card. More difficult and quality wines will gain the player more victory points, and also more residual income.

After winter, players are able to age their wine, the grapes in their crush pad. This allows the wine to become higher quality. Players will also collect residual income at the end of the year to be available for the following year. Then all players return to the spring phase. Play continues like this, following the seasons until a player has reached 20 points. Once that has occured, the players will complete the year and finish the game.

Viticulture has beautiful components throughout the entire game. The board is beautifully illustrated with action spaces being tasteful and not distracting from the theme. Player boards and both helpful and thematic. The wooden meeples are high quality, and made in colors that are easy to distinguish for people who are colorblind.  The glass beads for the wine tracking are innovative as you can still see the level of wine beneath the tracker.

Viticulture has become a fast favorite amongst my whole family and group of friends. In fact, it has taken people who supposedly hated worker placement, and made them more open to trying others because of how much they love this game. I agree with the general sentiment about this game. It is one of the best worker placement games I have played, because gameplay is well designed and easy to follow, the theme is relevant throughout gameplay, and there are unique mechanics that are not seen throughout other similar worker placement games.

One thing I especially like about Viticulture is the ease of teaching new players. The seasons allow new players to ease into the game, only learning a few new actions at a 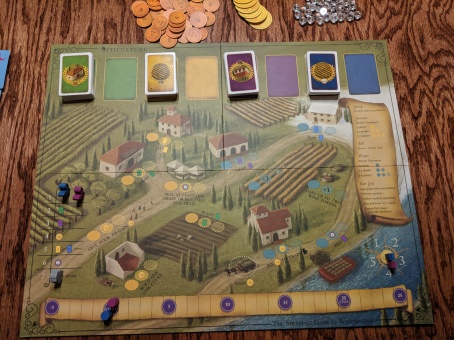 time. I generally find that after the first year, new players have a good enough grasp of the game to play competitively, even if the gamer is relatively new to worker placement games. New players also seem to enjoy that the turns are quick, and very simple. Players will take one action, and those actions are clearly defined by easy to understand symbols. This clarity makes it one of my favorite games to teach. The only downside to teaching this to new gamers, is that if playing at a high player count with many new players this game can become very long. A typical game of Viticulture for me lasts a little over a hour. However, playing a six player game, with multiple new people took about three hours.

Despite the simplicity of the turns, the game has a variety of strategies behind it. Players will find that managing their workers to meet their specific strategy can be a challenge. Each time I play I try to do a new strategy, and I still find new strategies each time I play. This demonstrates strong replay-ability. One thing I will say though, is that if a player is struggling to find a good strategy there is a strong potential for a runaway leader. I have played games where a person won with over twenty points, and I ended with just eight. These kinds of victories can relate to player strategy, luck of visitor cards, and luck of wine orders drawn, but are not unusual.  If players do ever find themselves looking for more variety, there are already two expansions released, and a third coming this summer. I will do a full review of Tuscany and Moor Visitors soon to discuss the changes in gameplay with these additional components.

Overall I highly suggest this game if you enjoy medium weight Euro games. There is enough variety of mechanics to allow it to stand out among other titles. Beyond the fact that it is thematic and mechanically interesting, it also has a great production quality and value for the cost. Stay tuned for my review of Tuscany, Moor Visitors and the upcoming Visit from the Rhine Valley.