Throughout my time student teaching and doing various field experiences, I had the privilege of working at a variety of different schools. Too many of these schools did not have enough money to provide their students with basic supplies. Things like, paper, pencils, books and other basic needs for a school were not being provided. Teachers were frequently paying a lot out of pocket to make their classroom functional. Many times parents in the area also struggled to provide these basic necessities because of other costs at home.

One thing I liked to do with these schools was to work with local stores, and the staff at the school to put on a Family Game Night. When we would do this, the stores and everyone involved would reach out to various publishers, game stores, game designers and well pretty much anyone they had a relationship with in the gaming industry to see if they could get games to be donated to the gaming night. We would then bring the games, and any other thing we could get donated things like Meepillows, artwork, and RPG books would sometimes also be included to the family game night. Additionally we would bring our own simple to teach games. Then we would sit down with families and teach them how to play the games we brought. Each family would get raffle tickets to win game prizes that they could take home as well. 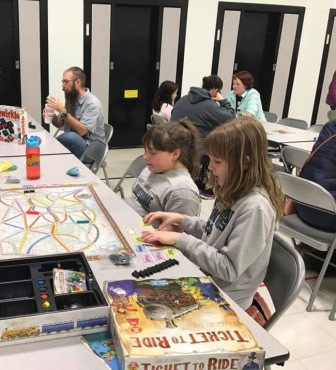 I felt like these events benefited the community in a variety of ways. First, it gave the children something they could do to keep out of trouble that was relatively low cost. The Game Night was always free, and we made a conscious effort to bring low cost games to play. Second, this gave families something to do together for free a couple times a year. Third, it gave these kids a chance to win something that they would really cherish. Working in these schools I learned the true value of small gifts. Many of my students were homeless, others lived in a house with 16-20 other people. When they were able to win something like a game or a Meepillow to keep for themselves they looked like they had just won the lottery. We would make sure to teach each child their game before leaving so that when they went home they could play it. It gave those children an escape from a sometimes not so pleasant home life. The value of that time spent with family doing something that the kids enjoyed was completely priceless.

These kinds of events took a lot of man power, and a lot of planning. However, it is something that I would love to see people start doing more frequently, especially for those who may be less privileged than others. It would not just have to be at a school either, it could expand into community centers, homeless shelters, group homes for people with disabilities, retirement facilities…any where that people may benefit from spending time with others and the joys of playing a game with someone could spread. Even when I ran Family Game Nights such as these, they were not always at underprivileged schools. Sometimes they were just at schools who wanted to bring families closer together. This is something that I could have never done though without the help of the gaming community. I am always so thankful to those people who are willing to donate their time, donate games, and donate product to these kinds of events. We truly could not do events like this without people willing to give back.