The manor at the top of the hill has a reputation of being haunted. Things seem to move in the night, and not just ghosts either. The house itself seems to move and tilt. However there are treasures to be had in the mansion. Will you be the first person to break the curse, get the treasure and escape the mansion alive? 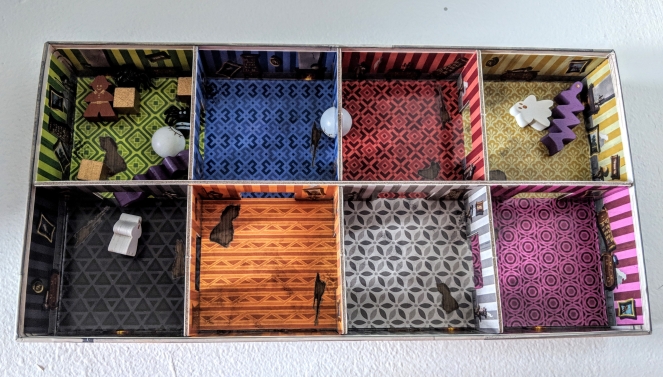 There are two modes of game play in Shaky Manor, but they both have the same basic concept. The first mode of play is where players are drawing a colored room card and trying to get the meeple and three treasure chests into that colored room before their competitors do. In order to do this, players must shake their mansion until all other elements are out of the room listed. This is considered the “easy” mode, great for young kids because they are always working towards the same goal.

The hard mode is mechanically the same, with players trying to shake their manor to get certain elements in a colored room. However, in this case the elements change based on the card listed. When players draw a room card, the deck will show a new card faced up with various items that can be found in the house. The players must race to get all of those objects in the room, while ensuring that no stray objects end up in there. The first player to do so takes the room card.

Once a player has six room cards they win the game.

Components in Shaky Manor are fairly simple, but are very eye catching. There are the four room boards (two of which will need to be assembled when opened), a variety of different chits that go into the mansions, and a deck of cards. Players should check to see that all players have the same amount and types of chits before starting the game.

One fun thing about Shaky Manor is that players can actually see and “try” the game through the box, as there is a see through area on the box. While it does not actually effect game play, it was still an interesting component decision.

As far as the quality of the components themselves, I would say that they will hold up to the violent shaking that they will be forced to endure. The cardboard is sturdy and the chits are all either wood or strong plastic. My only component complaint is that two of the room tiles are very similar in color and can only be distinguished by a slight change in color and tiny symbols within the room. I would have liked to see the floors be more distinguished (maybe having different types of flooring, or more easily discernible colors)

Shaky Manor is a game that is great for families. It can be taught in under a minute, and has both an easy and hard mode so that the game can grow harder as children seek more of a challenge. Kids will be engaged as soon as they see the box and are able to shake it around and see the objects moving. The fact that it is so short also may be great for busy

families looking to spend some time together on the weeknights. Set up and take down is especially fast, because all of the components should be set up after the first play through, meaning all players will need to do is open the box and shuffle the cards.

While Shaky Manor is definitely engaging for children, and provides short term competitive enjoyment for adults, I am not sure that it will provide long term engagement for adults without children. While fun to play with a group of friends for a short period of time, adults may find the simplicity of rules and the amount of luck involved in where items start to be repetitive. It will be enjoyable to play occasionally, but may not see the table as often as other dexterity games that provide more variability and control.

That being said, if you are a fan of dexterity games, this would be an enjoyable addition to your collection. It looks and feels great. It is much quicker to set up than some other dexterity games making it great starting game for a game night.  I would suggest it if you enjoy games like Meeple Circus, Ice Cool or Dr. Eureka.  It is still very much a dexterity game, however set up and take down is much quicker than these other games so it is great for a busy family.

Look what came in today! I have been looking forward to trying Red Rising by @jameystegmaier since it was announced and I finally have it in my hands 😁 I am a huge fan of Fantasy Realms, so I’m looking forward to see how the two games are similar. I also read the first trilogy of Red Rising while doing middle of the night feedings for my baby, and really enjoyed the series. Looking forward to the last book being released before jumping into the second trilogy. I also picked up the Speckled Wingspan Eggs which I really didn’t need, but they were pretty so I caved 😂 If you have played Red Rising, what are your thoughts on it?
I hopped back into reviewing today by publishing my thoughts on @anvlminis! Anvl is a company that allows users to create custom miniatures for games. I tried it out, making my gnome character for an upcoming D&D campaign we have planned. My full thoughts on the product can be seen on The Meeple Street, but I am more than happy to answer any questions you may have!
Catapult Kingdoms by @vesuviusmedia_games is the first board game I have played since October! Since that time I have been in and out of the hospital, first with me, and then with my preemie in the NICU. I’m excited to finally be able to play games again and I intend to start reviewing again this week! I’ve missed gaming so much and I’m glad things are getting back to normal! Catapult Kingdoms is awesome by the way!
Merry Christmas everyone! I hope you all enjoy a safe and happy holiday with plenty of gaming and time spent with those you love, either in person or digitally! We will be spending the day in the NICU with Atticus who is just over a month old now 🎅🏻
This Thanksgiving I have a lot to be grateful for and I just wanted to share. On November 24th, my baby Atticus Christopher Hoffman was born 12 weeks premature, weighing only 1 lb 13 oz. I’m incredibly grateful that he has come out with a passion for life and has started out his first few days in the NICU so strong. I’m incredibly grateful for all the doctors, nurses and medical staff for making sure that Atticus and I were safe when my pregnancy took a turn for the worst. Their kindness and compassion has been truly a blessing through my pregnancy and now into the recovery process. Finally, I’m thankful for everyone around me who has taken the time to send positive thoughts or feeling towards use during this time or has stepped in to help me when I wasn’t’t able to do something on my own. The support I have get from the people around me has truly reminded me of the good in 2020. I hope everyone in the USA celebrating today has a truly wonderful day and takes the time to reflect on some things to be grateful for despite this crazy year.
Enjoying our nightly round of Digital Scythe from @asmodeedigital! I am stuck in the hospital until I deliver our baby, probably for another four weeks or so, possibly more if things stay stable. It is so nice to still be able to enjoy playing a board game with my family from afar, especially when I won’t get to see them for the holidays now! Feeling super grateful for game apps to keep my spirits up!
Loading Comments...
Comment
×
<span>%d</span> bloggers like this:
<span>%d</span> bloggers like this: