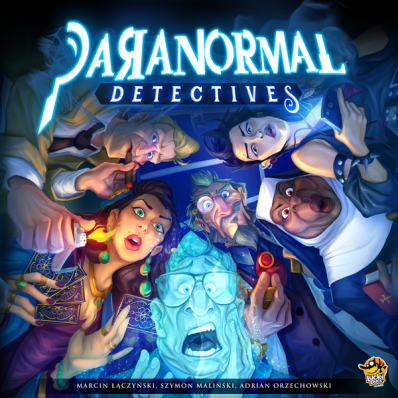 You have awoken as a ghost, desperate to communicate with a group of onlookers exactly how you have died. Your job is to use all the tools in your toolbox to effectively communicate your fate with one of the strange onlookers who have gathered to judge your departure. 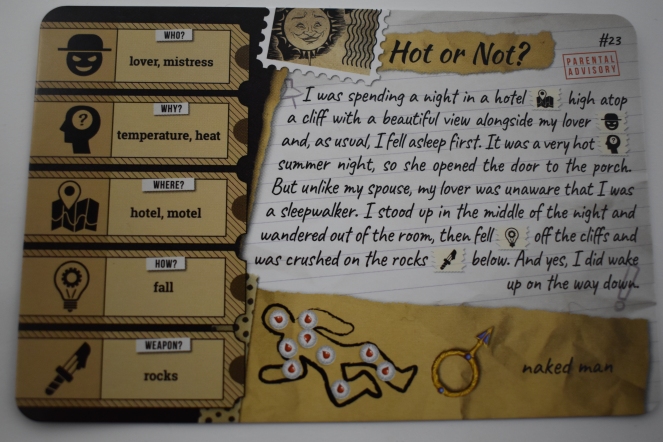 Paranormal Detectives is a deduction game where detectives and a ghost are working together to communicate the cause of the ghost’s death. In secret, the ghost will decide upon a story which they will try to relay to the detectives through a series of non-verbal interactions.

Turns are very simple in Paranormal Detectives. First, a detective will decide on an interaction card to ask the ghost a question relating to the story. Each interaction card specifies a different mode of communication. Some examples of these interaction cards include the use of tarot cards, a talking board that uses anagrams, and the ghost drawing an image on the detective’s back using their finger. 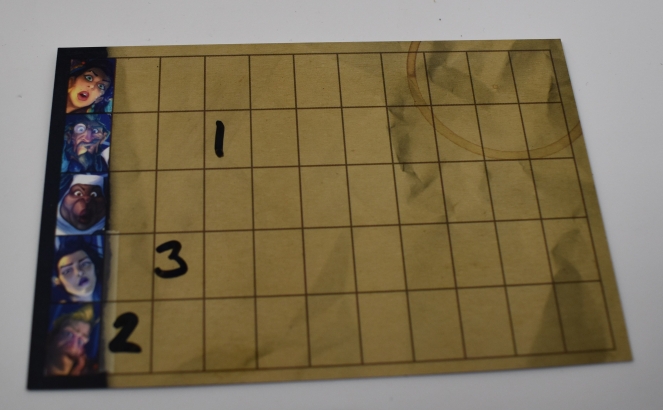 Players may also choose to try to guess the ghost’s story at the end of their turn. They will guess who, why, where, how and with what weapon caused the ghost’s death. Once the player has given their guess, the ghost will either confirm that they have won or the ghost will write a number between 0-4 on their sheet. This number tells the player the number of guesses they had correct. Players must get all five right to win. Each detective can only make two guesses throughout the game. If all players have guessed twice and have not guessed correctly the game ends. The player with the most correct guesses would win in this scenario.

The other way that the game might end is if all players run out of interaction cards. In this case, the player with the most correct aspects would be the winner. The only way for the ghost to win would be for a player to correctly guess all five aspects.

Paranormal Detectives comes with a variety of components that allow players to interact with the ghost. Some things included are five player screens, a game board, investigation sheets,  two moldable strings, tarot cards, dry erase makers and dry erase sheet, and some various cardboard tokens. The components are very high quality, and ensure that the game has a very tactile feel. While most of the components feel like that will hold up to many uses, the dry erase markers are poor quality, and dry out quickly. They do erase well off of the dry erase components though.

Paranormal Detectives has shockingly taken the place of Mysterium in our household. The game provides the same feeling of games like Clue or Mysterium, but the mechanics appeal to a larger variety of people. Those who do not like the visual nature of games like Dixit and Mysterium, but enjoy social deduction and figuring out puzzles will enjoy Paranormal Detectives. There is really an aspect of gameplay for every person’s strengths. Someone who is analytical thinker will enjoy the anagrams, players who enjoy the visual nature would enjoy the drawing or tarot cards, and players who enjoy tactile tasks would enjoy the hang mans ropes.  That being said, players who do not enjoy touching other people may be put off that many of the tasks include physical interaction between players.

Paranormal Detectives has been one of my favorite games released during 2019. It is a great game for players who are unfamiliar with modern board gaming because it feels familiar to Clue. Despite that fact that it is as engaging as other modern games, it is extremely easy to explain. Each of the interaction cards give a good explanation of the game mechanic, so players do not have to have everything memorized.

Due to the simplicity and familiarity of the game, it is also easy to teach to younger family members. I would suggest this game for children as young as seven or eight. Parents could also play the game cooperatively while teaching children the mechanics of the game. The flexibility between the cooperative play and competitive play makes the game work for a wide audience. That being said, some stories would be less appropriate for children of younger ages, so parents would want to preview the choices before allowing children to be the ghost.

The positive side of this is there are hundreds of scenarios possible. Players can pick from the included scenario cards. Additionally, players have the option to download the app, which provides hundreds of other scenarios. We have played this game a couple dozen times since getting it, and we still have not had to duplicate a scenario. 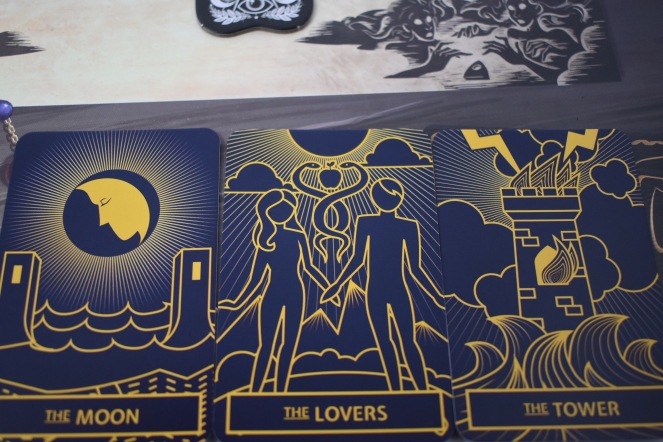 While each player having different types of interaction cards at their disposal leads to all players having to pay attention to everyone’s turns, it can also lead to frustration. This is partially because the different types of interactions may be less useful than other types. Some types of cards are really only beneficial in some cases.  We find that the anagram cards are almost universally useful, while things like the tarot cards can be much less useful.

Paranormal Detectives has become a favorite in our household. It has mechanics that appeal to a variety of different players, but still feels familiar to games like Dixit, Mysterium and Clue. If you enjoy any of those games, I highly suggest picking up Paranormal Detectives.

Will let me have my Christmas present early this year so that I could print minis for my students for our school D&D campaign. I got an Elegoo Mars 2 Pro resin 3D printer 😁 This was my first print, a Hero Forge character for our upcoming Witchlight Campaign! I was so surprised how easy it was to get started. It was something I didn’t realize I would want, but I’m so excited to have and be able to experiment with.
I was able to get my new miniature speed painted today and clean up my raw dice! My gnome was turned into a ceremorph in our campaign and I loved this mini from @mungos.marvelous.minis. The dice are the chaotic slush from @krakendice 🙂
Customary first day back with the kids selfie! Getting ready to mask up and welcome our kiddos back. Wish me luck!
It’s D&D Day! Started the day with an almost TPK…so it can only go up from here!
We spent last week traveling so I didn’t get a chance to share Will’s first Father’s Day gift. @eldritchartsus did a great job with the level of detail on the dice case and the inscription. The dice are Citrine Glass Dice (Atticus’ birthstone color) from @metallicdicegames. Will was ecstatic (except he thinks Atticus will be a Wizard not a Barbarian like his mom 😂).
We played a round of On Tour today. I’m debating picking up a few copies of this and the European Expansion to help next year in the classroom. I could see it being a great introduction to getting student familiar with Geography and where different states and countries are on the map!
Loading Comments...
%d bloggers like this:
%d bloggers like this: