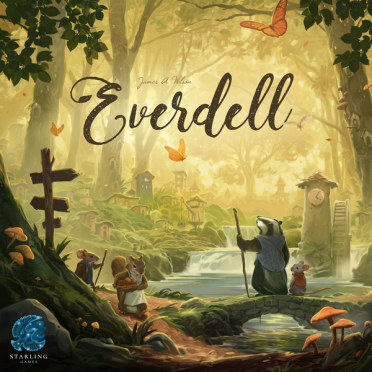 Everdell is a beautiful valley, shadowed by immense trees and divided by shining creeks. Hidden amongst the Ever Tree, a grand tree that offers share and protection the critters of the valley have found that it is finally time to settle. You will be a leader among the critters in the realm. You will need to help develop a city in a new territory. The layout will be all up to you. Who will you meet to inhabit your city? What buildings will be the staples?  It is your job to make the best city before winter returns once again.

Everdell is a light to medium worker placement game. During set-up each player will take two workers in the color/shape of their choice. The remainder of their workers will 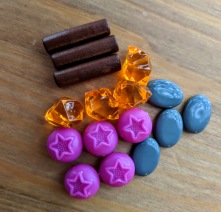 go on the top branch of the constructed tree.  On the next branch down players will place four special event cards. Then players will shuffle the main deck, dealing the first player five cards, and each player after that one additional card than the last player. Once all players have their cards the dealer will place eight cards into the large open meadow space on the board. The remainder of the deck will go into the space at the bottom of the tree. Then players will place either three or four forest cards (dependent on player count) on the far left and right of the board in the spaces that match the card back. Players will then place the resources and basic event tiles on matching spaces on the board. They will create a pile on the side for victory points and occupied tokens.

Once set up is complete players will begin taking their turns. Players will have one of three actions to choose to complete on their turns. The first action players can take is to place a worker. Generally when players place a worker, it is to get resources of some kind. When placing a worker on the board, players will look at the sign and take the indicated actions. Generally receiving some resources or drawing new cards. There are set spaces on the board, three or four forest cards which change each game, and the event cards. In order to get event cards, you will need to have certain combinations of types of cards or names of cards in your city. They act as a normal worker placement space, except once you claim the event card it goes into your city space. There are two kinds of worker placement spaces, large circles and small. Large circles allow multiple people on them, small only allow one worker.  The “Journey” space at the bottom of the board is only available in autumn. All other spaces are available through out the game.

The second action that can be taken is playing a card from your hand or from the meadow into your city. Cities can hold a maximum of 15 cards from the main deck (excluding special event cards and basic event tiles). In order to do this players must first pay the resources located in the upper left hand side of the card. However, there are exceptions to this rule. In order to best understand those exceptions, it is important to understand the different types of cards. There are two categories of cards:

Then each type of card has one of two rarities:

Finally each card has a type associated with it:

A player’s city may hold up to fifteen cards. It is suggested to place cards in a 3×5 grid so it is easy to tell when players may hold no more cards. The final action a player may take is to prepare for the next season. This should be done once the player has played all available workers for that season, and has no other cards they want to place. Once those requirements are met, the player will collect their workers, and look at the top branch of the Ever Tree. This will give reminders of what players need to do for each season. When going into Spring, players will gain a worker and then reactivate their green production cards. When going into Summer, players will gain a worker and then take two cards from the meadow into their hand. After taking any cards from the meadow they will draw from the deck and replenish the available cards. Finally when preparing for Autumn players will gain two more workers and activate their green production cards again. Two players may be at different seasons at the same time. Players do not need to wait until all players have passed into a season to start the next season.

Play will continue like this until all players have completed their Autumn season. Then players will count their victory points listed on their cards, event tiles, the coins they have gotten throughout the game and any purple prosperity cards. The player with the most victory points will win the game. Ties are broken first by whomever had the most event tiles, and then by whomever has the most leftover resources. 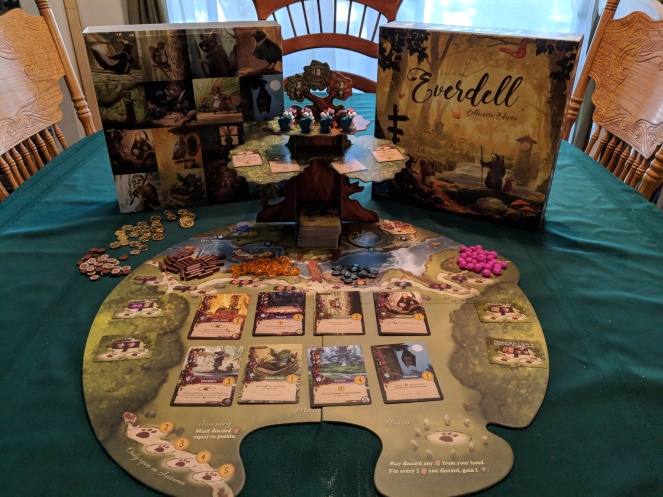 The components in Everdell are top notch. Honestly Everdell may have the best components in any game in my collection. For many, the components are what catch the eye and encourage players to sit down and try the game. It has wonderful table presence with the large tree towering above the game board. Additionally the resources look and feel great, and all have a distinctive non-color dependent feel.

The theme is visible throughout the entire game. Starting with the critter shaped meeples and continuing through the engaging board, and beautiful artwork, the game has a strong grasp on theme. Even the resources used make sense with their individual purposes. Players will need berries to attract new inhabitants and wood, stone and gems to build structures. The general stereotype that worker placement games are not thematic does not come into play here.

Additionally the artwork throughout the game is absolutely stunning. Players will feel as though they are reading a picture book or connecting with a movie as they look at the different cards. They are incredibly immersive. There is also a lot of attention to detail in the card art. Players will note that in the Construction cards, they can find the Critter that would inhabit that structure. Likewise, on each Critter card, players can see the structure they would live in. 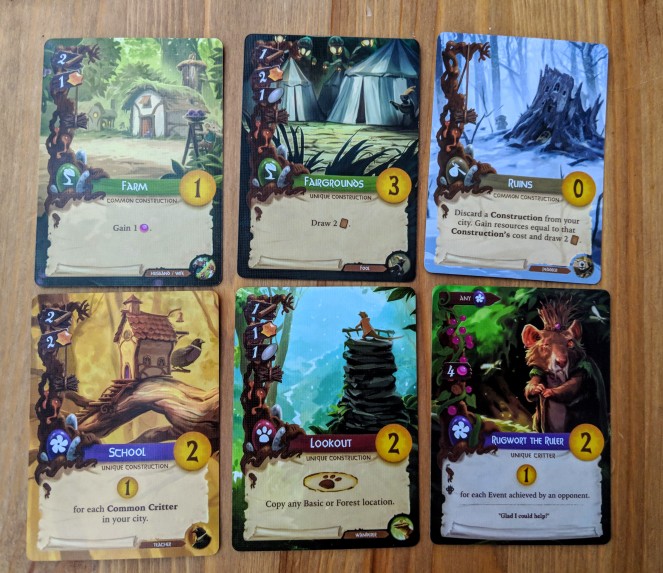 Everdell is top of the line for aesthetic of components. However, in some ways the aesthetic came before the functionality of the game. The most common complaint that I have heard and had myself is that the card text is too small. When playing with many players it is almost impossible to read the text when cards are in the meadow. Even worse though, is that when having a card in my hand it can still be incredibly difficult to read the text on Construction cards that indicates which Critter would live inside of it. I could not even hope to read that text in the meadow without picking up each individual card.

Another problem that came with the aesthetic for our table was when the table would get bumped, all the components stacked on the tree would fall off. This happened about three times to us during one game. While this would not be a problem for everyone, players who may not have the most sturdy table may see issue with this.

Everdell is an absolutely beautiful worker placement game, that will make a good addition to a collection for those who enjoy light to medium weight worker placement. It has some of the best components in any game I have seen, and with those great components also comes wonderful table presence.  Players who are walking by are bound to be drawn in by the aesthetics of the game.

The game also is relatively easy to teach, with the most complicated aspect being all the different information that is included on the cards. However, once that is taught the rest of the game is pretty self explanatory with guides printed on the board itself. As play progresses players will be happy with how quick player turns are, and overall how quickly the game plays. Each time I have played, it has played in just under a hour, with a full four person game.

That being said, many players did complain that the game felt really slow to start. Players only begin with two workers, and with the limited capability to get resources and the high cost of some cards, it can be relatively difficult to place cards in the beginning season. While players will get better in this aspect as they play and develop strategy, this can be especially frustrating for new players. One player stated that they felt like they did not get to do anything until the autumn season and then the game was over.

The game does offer a lot of value as far as replayability goes though. The game includes a variety of special event cards, forest cards and main deck cards. This means that each time a player plays, they will have a different city and be reaching for different goals. The number of cards in the main event deck can also be frustrating though, as in most games you will only see a fraction of the cards available. If players were hoping to get a Critter/Construction combination they may be left frustrated to know that the the card they were hoping to see may never come out during game play.

There is definitely some strategy involved in the game. Players who are able to focus on building an engine in the beginning to get certain resources or draw cards will have a definite advantage going into the later seasons. Watching for those Critters can also have a positive effect on end game scoring. Additionally players who focus on events benefit greatly compared to those who ignore them and go solely for points in the city. There are definitely various play styles that players can experiment with to find the right match for them.

Overall though, while Everdell is a beautiful game and is a good option for a light-medium weight worker placement, I was disappointed to find that mechanically it is not as innovative as the components are. The game mechanics feel very similar to most other worker placement games on the market. While not necessarily a bad thing, if players are seeking to add something that really stands out mechanically in the worker placement genre, I would not suggest Everdell. However, if players are looking to add a beautiful game to their collection that is easy to teach and accessible to new players I would suggest Everdell.

One thought on “Review of Everdell”