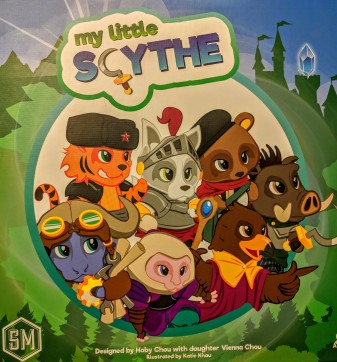 Each year the Kingdom of Pomme invites two sibling Seekers from all 7 of the animal kingdoms to participate in the Harvest Tournament. This friendly competition determines the new leaders of Pomme each year. It is up to these Seekers to compete to gain four trophies before the other kingdoms and secure leadership for their kingdom. 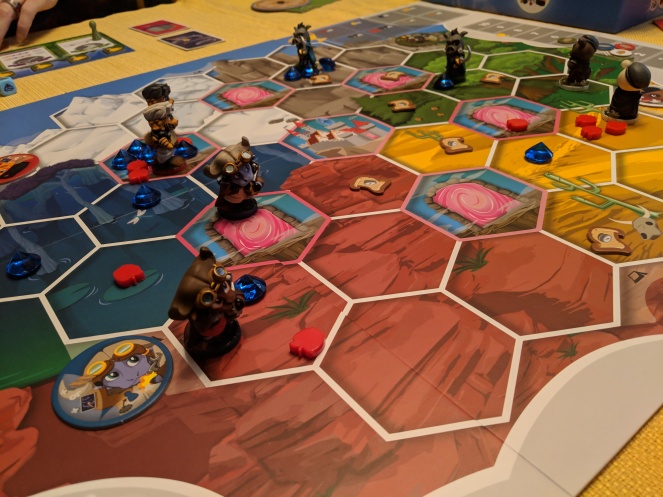 The goal in My Little Scythe is to place your four trophies as quickly as possible, making sure that all of your trophies are down before competitors.

During set up players will select an animal kingdom to play as. They will then take the two miniatures in that set, a player mat, their home base, an action pawn in their color, four trophies, a pie token and a friendship token. They will then place the home base on the board spaced marked with a tent. Finally they will place their four trophies in the spaces marked on their player mat. Players will place their friendship token on 3 on the friendship track and their pie token on 3 on the pie track. Then shuffle the magic spells and hand each player one. Also shuffle the personality cards and deal each player one.

Once all players have selected their home base and gotten all associated tokens, they will place the set up tile over Castle Everfree. They will rotate this a few times, and then flip it over. They will then align the tile so that the edges align with the edges of the board. The tile will tell players what resources to place on the board. Players will place resources in front of the occupied spaces of the main board, ignoring unoccupied home bases. Then place each person’s miniatures on their home base.

Then shuffle the action pawns to determine the first player. Once play begins, players will be able to do one action per turn, as indicated on the player mat. When a player decides an action to complete they will place their player pawn on that space to indicate the action they will take. Players may not do the same action twice in a row, however they may do an action in the same column back to back. For instance if a player crafted a pie on turn, on the next turn they may craft a spell card, however they could not create another pie. There are three types of actions that players may take:

Turns continue selecting one of those actions until one player has placed four trophies. Players may not place more than one trophy in one turn. The exception to that rule is during the last round. After a player has placed their last trophy, each player gets one more turn. During this turn, players may place as many trophies as they can.

The components in My Little Scythe are high quality. It includes 14 detailed chibi miniatures, a variety of cardboard tokens, three decks of cards, and plastic gems and apples.

I especially like that they included a Game Tray’s Insert which holds all of the components very well, with the exception of the wolf miniatures, which need to be finagled to fit in. It really helps keep the entire game organized and ready to go for the next play.

I would have liked to see a slightly thicker player mat, as I am afraid that over elongated plays, especially with kids that they mats may show wear and tear over time. In the future I would love to see an upgrade for these, and also I would love to upgrade the trophies into actual small trophies.

However layout of the game is clean and easy to follow. This is especially important in a family game because it makes it easy to explain to children. All symbols chosen are easy to follow and are consistent throughout the game.

When I first discovered My Little Scythe, it was hard to picture Scythe being re-themed and formatted to be family friendly, and yet still engaging to adults. After all, there are some adults that look at me like I am crazy when I pull Scythe out for game day. I was very pleasantly surprised to find that My Little Scythe surpassed my expectations in these fields. I have played it multiple times with only adults, and also at tables with children. Both experiences have been positive with both adults and children picking up the game easily and remaining engaged throughout game play.

My favorite mechanic in My Little Scythe is the focus on positive player interaction. I think that this specific mechanic is especially beneficial when teaching younger children how to “lose” a battle gracefully and still come out of the experience with a positive outlook. The game does this well in two places. First, it encourages players to help one another out during the seek action. By helping other players, the seeking player is also helping themselves. It brings interesting strategy decisions into the field. However, my favorite use of the mechanism is during Pie Fights. When a player loses a pie fight and returns to their base, they are given a small consolidation prize of either those two pies or the spell card. This ends the interaction on a positive note. I could see this being especially helpful for parents trying to teach children how to recover from a loss, or for a teacher focusing on the benefits of helping one another.

Additionally many players will like that My Little Scythe feels reminiscent of Scythe, but is also more manageable to get to the table frequently. Scythe can take 2-3 hours of playtime, especially with inexperienced players. My longest game of My Little Scythe was just slightly over 45 minutes. It makes My Little Scythe approachable for families looking to play a game after dinner, or game groups who can only meet for a short period of time.

The one difference between Scythe and My Little Scythe that I could see some players not being fond of though is the introduction of dice. While they add a very small aspect of randomness to the game, it can make the difference between winning and losing in the final rounds. Coming from Scythe which has very few randomized elements, some players may be discouraged by the introduction of the dice mechanic.

Overall though, I would highly suggest Scythe for families with children who are seven or older looking to introduce their children to slightly more evolved games. It is easily digestible by children that age. Additionally, it could be a great tool for teaching children how to paint miniatures due to the great painting guide included. I would also suggest it to adults who have no kids, but may not always be able to get Scythe to the table. If you or your child enjoys games such as Takenoko, Scythe, or Evolution: The Beginning, I could really see you enjoying My Little Scythe as well.

3 thoughts on “Review of My Little Scythe”