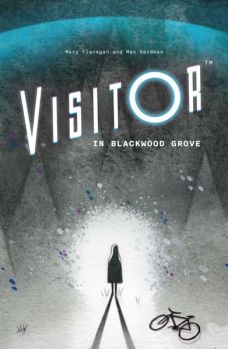 On a dark night in the small town of Blackwood Grove, the peace is disturbed by a sudden crash. Luckily only the Kid is around to see the chaos unfold. Government agents rush to the scene to try to get to the UFO, but there is a force field around it. The Kid and the Alien must build trust to help make a speedy escape before the Agents figure out how to work around the force field.

In Visitor in Blackwood Grove players will take on one of three roles, either the Kid, the Visitor or one of the Government Agents. The Visitor and the Kid are working together to be solve the mystery. All Government Agents work alone, not on a team with the other agents. When setting up, each player will draw a starting hand of seven cards. Then the Visitor will draw two face up cards and place them near the force field. Looking at those two cards, and the seven cards in their hand the Visitor will create a rule for the game. It could be something like, “Things that are red”, “Things that are natural” or “Things that have strings”. The Visitor can make up any rule, but it shouldn’t benefit one party over any one else. If the Visitor is struggling to come up with a rule, there are a deck of examples that can be tweaked to fit the situation.

Then the Visitor will place the two cards according to whether they would fit the rule or not. Cards that fit the rule will be placed face up on the eight card spots in the force field. Cards that do not fit, will be placed face up on the outside of the board. Imagine there are eight spots outside the board as well. There can only ever be eight visible cards surrounding the board. The rest will be stacked on other cards.

Now players will begin playing. The goal of the game is to be the first player (or team for the Kid and the Visitor) to correctly guess the passrule. When it comes time for any player to prove the passrule, they will do so NOT by guessing the rule verbally, but instead by drawing 4 cards and correctly guessing whether they would pass through the force field or they would be repelled by it. Each type of player will have their own actions. Let’s take a closer look at those.

Government Agents will start the game. If you have more than one Government Agent, the one sitting to the Visitor’s left will start. Agents always only have two options on their turn. First they can test an object. They do this by handing the Visitor a face down card. The Visitor will then look at the card, and place it face down on the edge of the force field if it fits the rule, or face down on the player mat if it does not fit the rule. After the card is placed, the Visitor will put that player’s marker on it to differentiate the different piles. Then the Agent will draw up to seven cards.

Once the Government Agent feels they understand the passrule they can instead use their turn to prove the passrule. They will draw four cards and line them up with the four rows on the forcefield board. The Visitor will then take their UFO chips behind the screen and place them to determine whether the items are correct or not. UFO chips on the board are admitted, UFO chips off the board are not. The Government Agent then pushes the cards they feel would be admitted towards the board. The Visitor reveals their answers. If the Agent was correct they win the game. If they were incorrect, the face up cards go into their correct space on the board (face up in the 8 card slots on the board if they were admitted, face up on the outside if they were repelled). When an Agent is incorrect, also move the Trust up between the Kid and the Visitor two spaces.

That is all for the Government Agent. Next let’s take a look at the Kid. The Kid’s available actions are dependent on their position on the Trust Track. They start up being able to predict objects. When the trust track is low, the Kid will do this by placing a card from their hand face up and guessing whether it will be admitted or repelled. The Visitor will then place the card in the correct spot. If the Kid was correct they will get to place another card and repeat the process a maximum of three times, or pass and instead gain one trust for the number of cards they have guessed correctly.  If they guess incorrectly, their turn immediately ends and they gain no trust. The Kid only draws cards when they gain trust, so it crucial to gain trust. Once the Kid and the Visitor have two or higher trust, the Kid may also prove the pass rule. This works the same as the agents, but if the Kid is wrong they do not get trust.

As the Kid gains trust, they get additional benefits as well, such as being able to play cards facedown, being able to prove the passrule directly after passing or having agents reveal their face down cards.

Turns continue with the Agents going, then the Kid, then the Visitor until someone correctly guesses the passrule or until the Visitor is out of cards.

Overall the components are quality. Everything feels like it will hold up to wear and tear. I really like that the trust board and player mats have clear reminders of what players can do on their turns, and what happens at each stage of trust. It makes explaining the game a easy and painless process. Also, the art is wonderful. It is thematic, yet easy to decipher.

Players who do not like mini cards may be disappointed that the object cards are relatively small. Luckily there is no text included on the cards, so players won’t be struggling to read off the small cards. I do wish that the force field was just a little bit bigger, as it does have a tendency to feel a little crowded towards the end of game play.

Bonus points? The box glows in the dark, which is a pretty cool touch.

Many people know, I really enjoy both asymmetric and social deduction games. It should not come as a surprise that I enjoyed Visitor in Blackwood Grove. I think it is a game that can easily be taught to anyone (even non gamers) because turns are simple and options will be right in front of the players because of the player mats. I would even say that you could probably teach a child as young as 6 or 7 to play the game.  However, I would suggest having the most experienced player be the Visitor, at least until players grasp the concept of the game. Despite the fact that it is mechanically simple, it can be very difficult to actually win.

You need to be able to predict how another person is going to view the card that you hand over. Some objects can be open to interpretation throughout the game and that can be difficult. For instance, yesterday I played a game where the passrule I created was objects you can find in a school. One of the Agents passed me a card with Saturn on it. I repelled it from the force field, because you won’t find an actual planet in a school. He insisted after the game that you could find them on posters or models. This adds an extra layer of difficulty that players won’t necessarily think about until they are actually playing the game.

I already mentioned that the artwork is beautiful, but it is also colorblind accessible. Any cards that have a color reference will also list the name of the player it is associated with. Thus meaning that color plays almost no role in the mechanics. Unfortunately for some, the game has a minimum player count of at least three players. This makes it not a good fit for players who look for solo games, or for people who just live with one other person. It was something I struggled with while trying to play it for the review. During the week, I am normally only with my husband, so we had to wait until game night to play it.

Visitor in Blackwood Grove felt very similar to Mysterium to me in gameplay. While not exactly the same concept, the Visitor took on a similar role to the Ghost. Both games have similar tension, and in both games the person in this role could choose not to talk at all. In addition to mechanical differences, Visitor in Blackwood Grove is also a lot shorter than Mysterium, allowing players who want a strong deduction experience to do so in a short period of time with limited set up. The set number of rounds ensures that this game will play in under twenty minutes, and set up is easy and does not take up much space. I could easily see taking this to a brewery or public space to play.

In addition to Mysterium, I could see players who enjoy games like Dixit, Muse or Whitechapel enjoying Visitor in Blackwood Grove. It has a similar feel to many of these deduction games but it provides it in a much quicker experience. It also focuses heavily on the visual element of game play similarly to Dixit or Muse. Also, if you enjoy movies like E.T. or Paul, you might enjoy this game themeatically. The idea of taking the role of the alien escaping can be very appealing. Overall, I have found that Visitor in Blackwood Grove will be a keeper for me. I enjoy that it is quick to play and provides an asymmetrical game play experience, but I do wish that it had a two player variant. It will be available to purchase as a Target Exclusive on August 1st, 2018.